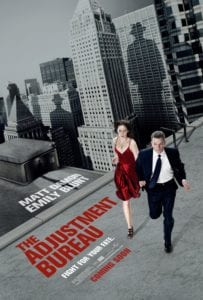 Excellent movie – but the ending could have been better

Warning: Spoilers
“The Adjustment Bureau” is one of those movies that is intelligent, beautiful, charming and just enough action to keep the story moving to places you wouldn’t expect. It is also one of those cutting-edge movies that makes you want to watch a second time just to see what was done. It’s like watching a magician’s entire act and being amazed, then peaking behind the curtain to see where the rabbit really is before he’s pulled from the hat.

Matt Damon is the perfect lead as the charismatic, young politician who wants nothing more than make a real change to our country. He’s also just been steamrolled in an election and is practicing his loser’s speech in the men’s restroom when Emily Blunt steps out of a stall to the stunned amusement of Damon’s character. In a few moments of romantic flirting, Damon and Blunt kiss and she disappears. When they reunite a month later – to the chagrin of the by-the-book “Men in Hats” – things take a sideways turn when Damon realizes the world actually has specific designs and suffers potentially catastrophic changes if any of those designs are altered.

When Damon’s character is faced with the choice of never seeing the woman of his dreams ever again or finding her for a few wonderful moments of pure love before getting caught and being lobotomized permanently, his choices will alter not only his destiny but the woman he loves and possibly the country itself!

The supporting cast is splendid. John Slattery is the middle-man “Hat” who strong-arms Damon into changing his mind about Blunt’s character and is believable in his bully-wannabe persona – until the real bully arrives. Terence Stamp is his evil best as the ultra-bully “Hat” who will stop at nothing – including causing physical pain to a main character – to make sure everyone follows “the grand plan”. To see Stamp’s supposedly righteous character stray to the dark side more and more in order to set right what went wrong is a very clever twist. Anthony Mackie is excellent as the put-upon, screw-up “Hat” who has ethics above his own bosses and wants to do the right thing, no matter the personal cost.

The story bobs and weaves through a series of doors and passageways in New York City and it’s outlying communities. At times this can get confusing and may need to be watched a second time to keep up with the speed once Damon and Blunt start their race to the finish.

Here’s the spoiler alert: I wish they would have shown “The Chairman” at the end. Reading the IMDb site, I hear there was an actual scene filmed where Damon meets “The Chairman” but it was axed by the distribution company due to the actor playing that character was of a minority. I wish the director and/or the powers that be who own the rights to the movie would create a “Director’s Cut” DVD with the correct scene put back into the story. It would make much more sense at the end. Shame on whomever would have chopped a much-needed scene simply because of the color of one’s skin and/or their religious heritage.

With that glaring exception at the end withstanding, this movie is well worth watching. The scenes are gorgeous. The cast is stellar. The story is twisted and intelligent enough to keep your interest throughout. It is a very well done piece of Hollywood magic. Downtown New York and it’s huge concrete jungle has never looked so overwhelming and looms large as the backdrop. Highly recommended. 8 out of 10. Once they re-insert the scene with “The Chairman” at the end, it will be a 9 out of 10.

The affair between a politician and a contemporary dancer is affected by mysterious forces keeping the lovers apart.