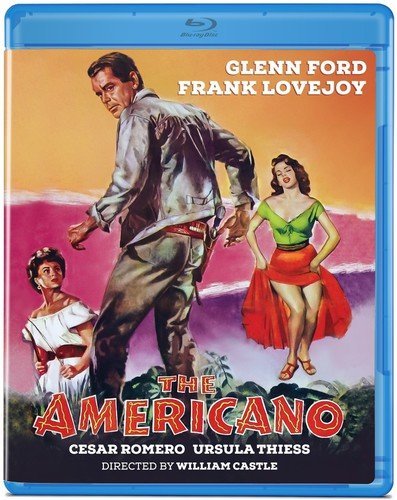 Olive Films has announced that addition of the western The Americano to their upcoming slate of Blu-ray releases. The film was directed by William Castle and is based on the screenplay by Guy Trosper. The western starred Glenn Ford, Frank Lovejoy, Cesar Romero, Ursula Thiess, and Abbe Lane. The Americano is currently available for pre-order online and will be available in stores everywhere beginning on September 24th.

Ford stars in this lush and unusual “south-western” as Sam Dent, a rancher who travels to South America to deliver a shipment of bulls to a Brazilian ranch owner. The troubles are many for this brave Yankee as he endeavors to get the bulls to the ranch through the Amazon, only to find the buyer has been murdered. Romero costars as dashing bandit leader El Gato, and Lovejoy is an unscrupulous land grabber. In addition to the two of them, Dent has to navigate his way clear of a brewing war between ranchers and farmers. He also finds himself caught between the loves of Teresa (Lane) and Marianna (Thiess). Other troubles include piranhas, snakes, and jungle cats. This film might seem rather ironic in light of global warming and the deforestation of Brazil, but it’s rousing fun anyway, with a lively pace and Ford in fine form. The Americano was released in January of 1955.

Disclaimer: Affiliate links are contained in this post. This means when you click a link, and purchase an item, Movie House Memories will receive an affiliate commission. Advertisers and Affiliate Partnerships do not influence our content. See our Terms of Use about the inclusion of affiliate links on this site for more information.
August 14, 2013
1 minute read
Show More
Back to top button
Close
Close