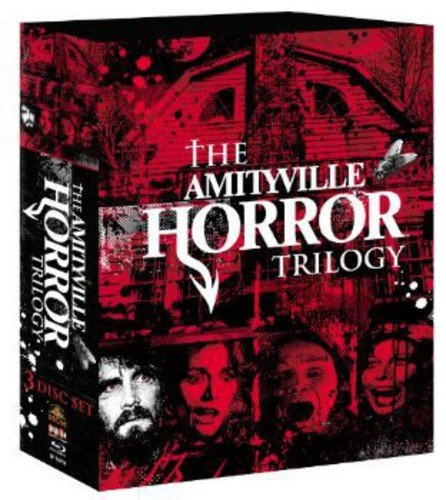 In the original The Amityville Horror, the Long Island colonial house on the river’s edge seemed perfect. Quaint, spacious and affordable, it was just what George and Kathy Lutz had been looking for. But looks can be deceiving…and their new dream home soon becomes a hellish nightmare as the walls begins to drip blood and satanic forces haunt them with sheer, unbridled evil. Now, with their lives – and their souls – in danger, the Lutzes must run as fast as they can from the home they once loved…or fall prey to its terrifying power. The film was directed by Stuart Rosenberg and starred James Brolin, Margot Kidder, and Oscar-winner Rod Steiger. The Amityville Horror was released in July of 1979 and grossed over $87 million at the box office.

The Amityville Horror was followed up by Amityville II: The Posession. Before the residence at 112 Ocean Avenue became infamous in The Amityville Horror, its supernatural legacy of terror had already begun. Inspired by a true story, this chilling prequel is a bloodcurdling, special-effects-laden encounter with all-powerful, all-consuming evil. Although the Montellis are not exactly the “perfect family,” at least they’ve found the perfect home. And even though a liquid that looks like blood gushes from the kitchen faucet and every window has been nailed shut, it still qualifies as their dream house… until all hell breaks loose! A local priest tries to rid the house of unclean spirits, but what he doesn’t yet suspect is that teenage son Sonny Montelli has been possessed, body and soul, by a murderous demon bent on total destruction. Amityville II: The Posession was directed by Damiano Damiani and starred James Olson, Burt Young, and Rutanya Alda. The film was released in September of 1982 and grossed over $12 million at the box office.

In Amityville 3D, the third film in the series, to debunk the Amityville house’s infamous reputation and take advantage of a rock-bottom asking price, skeptical journalist John Baxter (Roberts) buys the place and settles in to write his first novel. But as soon as the ink on the deed has dried, people who have come into contact with him-and the house-begin to meet with a shocking fate. Is it coincidence…or is this house really the gateway to hell? Packed with bone-chilling special effects, this third rendezvous with terror in Amityville stars Tony Roberts, Tess Harper, Robert Joy, Candy Clark, Lori Loughlin, and Meg Ryan. The film was released in November of 1983 and grossed over $6 million at the box office.

Disclaimer: Affiliate links are contained in this post. This means when you click a link, and purchase an item, the MHM Podcast Network will receive an affiliate commission. Advertisers and Affiliate Partnerships do not influence our content. See our Terms of Use about the inclusion of affiliate links on this site for more information.
May 12, 2013
2 minutes read
Show More
Back to top button
Close
Close