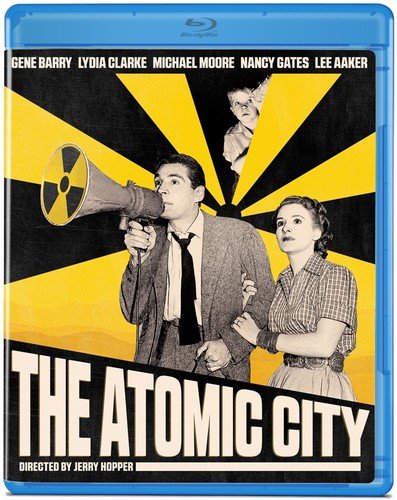 Olive Films has announced that addition of the thriller The Atomic City to their upcoming slate of Blu-ray releases. The film was directed by Jerry Hopper and written by Sydney Boehm. The drama starred Gene Barry, Lydia Clarke, Michael Moore, Nancy Gates, and Lee Aaker. The Atomic City will be available for purchase online and in stores beginning on September 17th.

In the film, nuclear physicist Frank Addison (Barry) and his wife are living every parent’s worst nightmare: their son Tommy (Aaker) has been kidnapped. The kidnapper’s ransom demands are the secrets behind the H-bomb! The desperate scramble to rescue Tommy unfolds at a rapid pace in The Atomic City… from the streets of Los Angeles to cliff dwelling of Santa Fe; the real-life locations provide the vivid backdrops for this taut and suspenseful thriller.

The Atomic City was released in May of 1952 and was nominated for an Academy Award for Best Writing, Story or Screenplay.

Disclaimer: Affiliate links are contained in this post. This means when you click a link, and purchase an item, Movie House Memories will receive an affiliate commission. Advertisers and Affiliate Partnerships do not influence our content. See our Terms of Use about the inclusion of affiliate links on this site for more information.
August 5, 2013
1 minute read
Show More
Back to top button
Close
Close