Breck Coleman leads a wagon train of pioneers through Indian attacks, torrential storms, arid deserts, swollen rivers, and over inhospitable terrain while looking for the murder of a trapper and falling in love with a woman named Ruth. 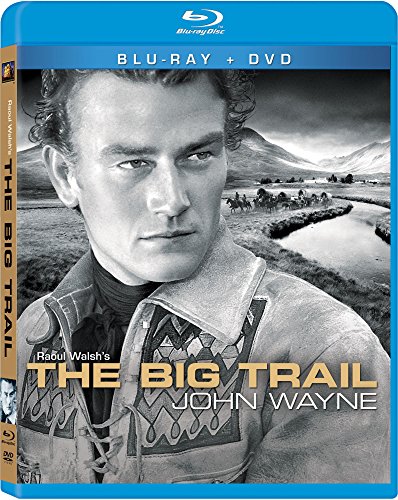 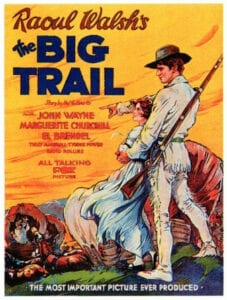 The Big Trail begins out on a lavish riverboat. There, a rugged but friendly adventurer named Breck Coleman (John Wayne) signs up to lead a trail for hundreds of settlers in wagons from the rivers of the Mississippi to out West. While getting ready for the big cross country trip, quarrels among those in charge heats up.

After a stampede and trouble crossing a river, the caravan finds itself heavily damaged, and they stop for repairs. Soon, the prairie schooners continue on West. When an assassination attempt on Breck fails, he returns back to the wagons safely, and keeps his romantic interest up with beautiful frontier woman Ruth.

Native American tribes lineup to halt progress, but Breck negotiates with them through a pow wow to continue through their territory unharmed. Native Americans raised Breck, and speaks their language. Reaching a cliff face, they literally lower their wagons down it alongside people and animals.

They arrive at the last outpost, which is the tipping point where travelers choose to go onward or not. Breck’s rival, Black Hat Thorpe, murders a comrade, and then blames Breck; however, the truth prevails. After a blizzard and other mishaps, they finally get closer to the sacred valley.

Away from the wagons, Thorpe attempts to kill Breck, but fails miserably. A scheming traveler, with good intentions, sends Ruth into the woods to search for something near the settled wagon train under false circumstances.

She notices a shadowing figure approaching her, who turns out to be Breck—alive and well. They embrace within the tall tree forest; likely to live happily ever after alongside all the survivors of the big trail.