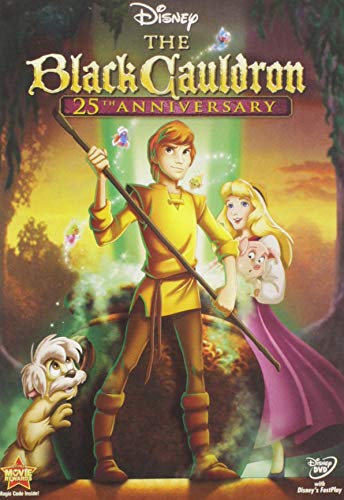 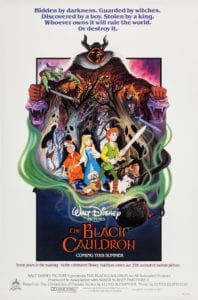 In The Black Cauldron, a young boy named Taran is an assistant pig farmer/wrangler. He learns that his pig, Hen-Wen, is a mystical piece of prized pork belly who has oracle style powers which can locate a Black Cauldron that the evil Horned King has been trying to get his skeletor hands on so that he may raise an army of the dead.

After a brief, but dreadful sequence where Taran imagines himself to be a great, sword wielding warrior, the pig goes missing; having been taken to the castle of the Horned King by a pair of Night Fury dragons that have been trained well.

Taran is befriended by a dog-like creature Gurgi who talks similar to Gollum and likes apples.
Taran high tails it to the Castle climbing up the vertical walls to save the pig, but the Gollum dog doesn’t follow him.

To keep a long complicated often convoluted plot line short, Taran is captured, put in a cell, then escapes with the help of Princess Eilonwy, who just appears out of the floor with a floating glow ball. Together they face the Horned King, and escape with the pig. They discover the dead king’s catacombs beneath the Castle where Taran takes his excalibur sword from his corpse, both giving him confidence and powers he wishes to obtain as a warrior.

The princess joins in on the adventure along with another ridiculously named character Fflewddur Fflam which includes entering an underground fairy like kingdom introducing the Fair Folk.

They all learn that the Cauldron is held by three Witches that come onto the scene, and are willing to swap for Taran’s magical sword which he reluctantly gives up.

Before too long, the Horned King has his hands on the cauldron, and he begins his evil plot to bring back deadites and form them in to a marching skeleton army. The only way to stop the anarchy is for someone living to throw themselves into the Cauldron to break the evil spell which is pretty dark theme for Disney. The mixed up mutt/thing, Gurgi, who is different from us all, decides he should sacrifice himself so that evil is defeated.

The Horned King, seeing that his plans have been destroyed, goes berserk by being consumed through a mixture of primitive CGI and old school animation fire and brimstone. The witches appear; wanting the cauldron back. They make a swap and bring Gurgi, the weird dog thing, back to life in exchange for the cauldron. The sexy witches head off into the sunset while Dalban and Hen Wen look at a vision of Taran; praising his pig heroism even though that dog really saved the day.