Oscar winners Anthony Hopkins and Mel Gibson lead a stellar cast that includes Sir Lawrence Olivier, Daniel Day-Lewis and Liam Neeson in this action-packed adventure bursting with sensational battles, raging storms and an intensity as powerful as the mighty sea itself! Bristling with commanding performances, blazing dialogue and “superb action scenes (says the Los Angeles Times)”, this spectacular movie according to New York Magazine is everything a high adventure fan could want according to Variety)! Hopkins delivers a brilliant portrayal according to Boxoffice magazine as William Bligh, a real-life sea captain who, in 1787, steered The Bounty on a 27,000-mile voyage into danger, chaos and madness. After 31 days of battling severe sea squalls and Bligh’s ever-increasing cruelty, the weary crew is relieved to finally land on a remote island. But soon their tyrannical captain wants to sail again, and the desperate men turn to first mate Fletcher Christian (Gibson) to help them take the ship by force… or die trying. 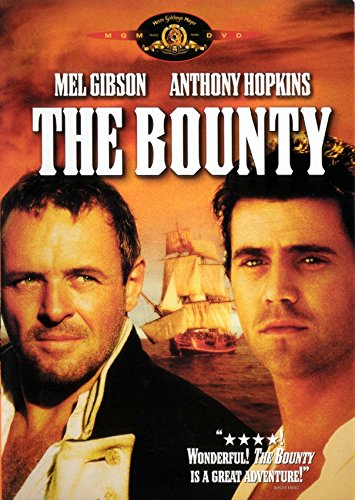