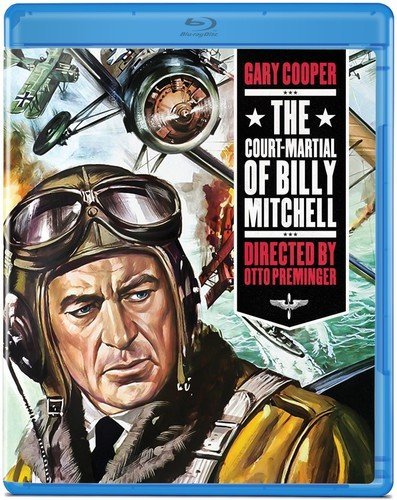 The Court-Martial of Billy Mitchell [Blu-ray]

Olive Films has announced that addition of the war drama The Court-Martial of Billy Mitchell to their upcoming slate of Blu-ray releases. The film was directed by Otto Preminger and starred Gary Cooper, Charles Bickford, Ralph Bellamy, Rod Steiger, Elizabeth Montgomery, and Jack Lord. The Court-Martial of Billy Mitchell will be available for purchase online and in stores beginning on July 30th.

In the film, it is the end of World War I – and the birth of aerial warfare. Though airplanes had only been used for reconnaissance, Brigadier General Billy Mitchell (Cooper) has foreseen their deadly power and importance in future combat as bombers and fighter planes. But his superiors in the Army Air Service are blind to his prophecy. When Mitchell begins his campaign to build an armed air force against their will, they brand him a traitor and summon him for court-martial. Although the Army attempts to cover up the trial, it becomes an explosive media event that explores the self-serving incompetence of the military and how one man’s vision can serve to shape history.

The Court-Martial of Billy Mitchell was released in December of 1955. The film was nominated for an Academy Award for Best Writing, Story or Screenplay.

Disclaimer: Affiliate links are contained in this post. This means when you click a link, and purchase an item, Movie House Memories will receive an affiliate commission. Advertisers and Affiliate Partnerships do not influence our content. See our Terms of Use about the inclusion of affiliate links on this site for more information.
June 11, 2013
1 minute read
Show More
Back to top button
Close
Close