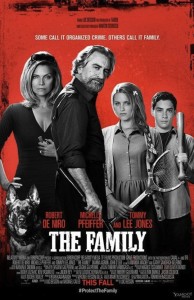 Relativity Media, via Yahoo! Movies, has released the first theatrical trailer and poster for the dark comedy The Family. The film is directed by Luc Besson and stars Robert De Niro, Michelle Pfeiffer, Tommy Lee Jones, Dianna Agron, Dominic Chianese, and Vincent Pastore. The Family is scheduled to hit theaters on September 20, 2013.

The darkly comedic action film tells the story of the Manzonis, a notorious mafia family who gets relocated to Normandy, France under the witness protection program. While they do their best to fit in, old habits die hard and they soon find themselves handling things the “family” way. The film is based on a novel by Tonino Benacquista and screenplay by Besson and Michael Caleo. Martin Scorsese is one of the executive produces of the film.

I Give It A Year – Trailer

I Give It A Year – Trailer