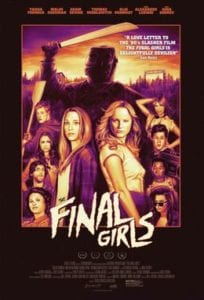 THIS is what a horror satire is supposed to look like!!

Warning: Spoilers
I miss the classic horror movies of the late-’70s and early-’80s. Going to the movies with a group of friends to be scared was fun back then.

Today, the “Horror” genre means “gross out the audience through any extreme means and depravity possible”. The “SAW” franchise and garbage like it is lost on me. I won’t watch “snuff” films for the sake of “art” – similar to the old “Faces of Death” which was banned internationally. No wonder Columbine and so many scary real life events are happening. People are force-fed vile, classless, merciless carnage in theaters dressed as a “movie” when it is nothing close to art. If it’s got a “script”, it’s acceptable because it’s Unrated. What happened to our movie standards? Whatever happened to fairly tongue-in-cheek villains like Freddy, Jason and Michael Moore-type slashers of the not-so-long-ago?

Back in the early-1980s, we used to have teen movie nights with slasher films like “Carrie”, “Friday the 13th”, “Nightmare on Elm Street”, etc. Old, scratchy VHS tapes on a boob tube with popcorn and soda with a mixed group of teenagers who laughed and jumped at “the killer who couldn’t die” and the stories that were told – not just to slaughter but to entertain and scare the audience. It was nearly a religious right of passage to watch those movies en-masse. Those days are long gone I am afraid… Or are they?

“The Final Girls” is everything a horror film from the ’80s was supposed to be – gory, funny, sexy, campy, killer who can’t die… with some very modern twists. Imagine my surprise when this FABULOUS throwback movie appeared and almost made my stand up and cheer!! The casting was spot-on with newcomers who simply stole scene after scene from one another in the best way possible. You fall in love with the cast and actually care whether they meet their untimely demise or not as the movie progresses.

Synopsis: Max is a 15yo girl who lost her actress mother (Malin Ackerman) in a freak car accident three years ago. Flash-forward to today and Max still hasn’t gotten over the tragic loss. On the anniversary of mom’s death, there is a movie marathon showing her mom’s most famous role – the iconic 1980s slasher flick, “Camp Bloodbath”. So Max and several friends go to the movie with some reluctance but to honor her mom’s memory. During the festival, a fire starts and instead of fleeing into the stampede, Max and her friends are somehow transported INTO THE MOVIE! Once they realize what’s going on, they must figure out how to save the fictional characters (including Max’s mother!) AND THEMSELVES and survive the bloody rampage of Billy the crazed killer!

This is the movie “The Last Action Hero” wanted to be but wasn’t with the protagonist being sucked into the movie and helping the characters along in the story. The best part of this movie – and there are many GREAT parts to this movie!!!! – is the writing. The writer and director truly cared about putting a quality movie together. This isn’t a movie done for the dollar. It is a genuine ode to ’80s slasher flicks. The humor, twists, and modern language blended so well into an entire story where real and fictional people work together to save one another in funny, tragic, heartbreaking fashion. It’s magical.

But my favorite part of the film is the dynamic between Max and her fictional yet oh-so-real mother. It isn’t just a “save her at all costs”-type thing. The delicate balance of future Max and fictional “Nancy” is extremely well written. You feel the chemistry of both actresses. Plus add in all the comedy and scary moments… This movie was just plain F-U-N!!!! To quote an ’80s term – it was “most excellent”.

The entire cast is a joy to watch. My 17yo son and I laughed at joke after joke – both 80s and current day. You could tell the actors had a blast on the set and their chemistry was evident on-screen in every single frame. The deaths were graphic enough, funny and surprising. It fit so perfectly together. Even the end is self-aware and hilarious. And please stay for the closing credits. You will be rewarded with even more laughs! 🙂

This past weekend, my son invited thirteen high school buddies of both sexes over for just such a movie fest – a good test group with different backgrounds. Nobody had heard of “The Final Girls” and most wanted different scary movies. My son held firm – and after the movie ended – every kid who was complaining at the beginning told him he was right. They LOVED it!!!

I give this my highest recommendation for any late-high school movie night for older teenagers who will appreciate the humor and is the targeted age group (re: age 17+). A perfect mix would be the original “Friday the 13th” (R-rated) and maybe throw in the original “Nightmare on Elm Street” with a teenage Johnny Depp (talk about “camp”!!) and “The Final Girls” (PG-13-rated) in that order. They would get the gist and gore of the original 80s feel of movies. Then the funnier, more updated “Final” movie. It would be a perfect evening to cleanse the horror pallet.

On a standard movie rating against all movies of any genre, I give it an 8 of 10. It is well worth watching. From a pure camp and comedy satire of old horror movies they don’t make anymore, I give it a 10 out of 10. This is a MUST WATCH for anyone who loved Jason/Freddy/Michael movies from years gone by. Grab some popcorn, invite some friends over and enjoy the show!!!!! 🙂

A young woman grieving the loss of her mother, a famous scream queen from the 1980s, finds herself pulled into the world of her mom's most famous movie. Reunited, the women must fight off the film's maniacal killer.