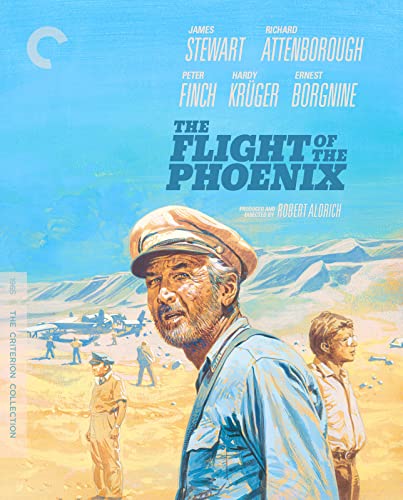 The Flight of the Phoenix (The Criterion Collection) [Blu-ray]

The Criterion Collection released The Flight of the Phoenix to Blu-ray on March 22, 2022. Robert Aldrich directed the film starring James Stewart, Richard Attenborough, and Peter Finch.

‘The Flight of the Phoenix’ Criterion Synopsis

A downed airplane is a motley group of men’s only protection from the relentless desert sun, in this psychologically charged disaster epic, one of the all-time great survival movies. James Stewart is the veteran pilot whose Benghazi-bound plane—carrying passengers played by an unshaven ensemble of screen icons including Richard Attenborough, Ernest Borgnine, Ian Bannen, Dan Duryea, Peter Finch, and George Kennedy—crash-lands in the remote Sahara. As tensions simmer among the survivors, they find themselves forced to trust a coldly logical engineer (Hardy Krüger) whose plan to get them out may just be crazy enough to work—or could kill them all. Directed with characteristic punch by Hollywood iconoclast Robert Aldrich, The Flight of the Phoenix balances adventure with human drama as it conducts a surprising and complex examination of authority, honor, and camaraderie among desperate men.