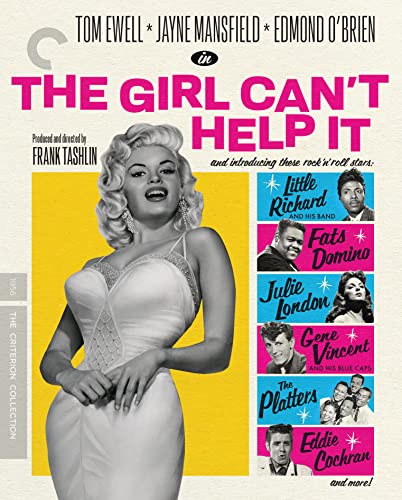 The Girl Can't Help It (The Criterion Collection) [Blu-ray]

In 1956, Frank Tashlin brought the talent for zany visual gags and absurdist pop-culture satire that he’d honed as a master of animation to the task of capturing, in glorious De Luxe Color, a brand-new craze: rock and roll. This blissfully bonkers jukebox musical tells the story of a mobster’s bombshell girlfriend—the one and only Jayne Mansfield, in a showstopping first major film role—and the washed-up talent agent (Tom Ewell) who seeks to revive his career by turning her into a musical sensation. The question is: Can she actually sing? A CinemaScope feast of eye-popping midcentury design, The Girl Can’t Help It bops along to a parade of performances by rock-and-roll trailblazers—including Little Richard, Fats Domino, Julie London, Eddie Cochran, the Platters, and Gene Vincent—who light up the screen with the uniquely American sound that was about to conquer the world.

New cover by Jaffa the Unknown