The Goonies takes place with Mikey and his friends living in the boring small town of Astoria, Oregon. There they yearn for adventure. One rainy day, the boys find themselves rummaging through Mikey’s attic when Mikey stumbles across an old map. Mikey thinks the map leads to One-eyed Willy’s treasure which will help keep everyone’s parent’s homes from foreclosure. They all head out on their bikes where they wind up at the very evil Mama Fratelli’s restaurant/hideout. In the basement, Mikey finds a secret passage that leads to caves below the town. As they head into the passage, Chunk goes to get help from the police, but the Fratellis catch him first. Chunk befriends Mama Fratelli’s disfigured son, Sloth while Mama and her sons go after the other kids to steal One-eyed Willy’s treasure too. Will they get the treasure, or will One-eyed Willy get the last laugh? 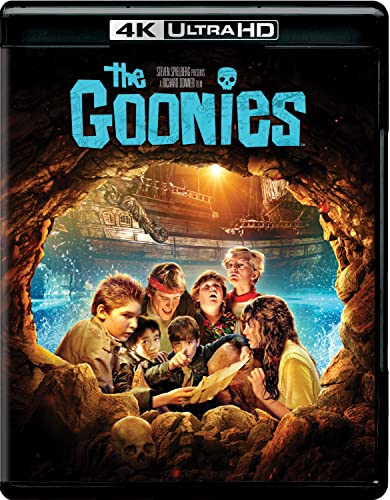 The Goonies takes place in a small town of Oregon known as Astoria. It rains there for 194 days out of the year—for 170 more, it pours. That leaves one day for a Goonie adventure!

In the middle of town, a group of young friends lives in a neighborhood dubbed the Goon Docks. Their parents all face foreclosure on their homes as the nearby Astoria Country Club wants to expand over their land. With all the rain, you might say they are underwater on their mortgages.

On their last day before their parents sign away their land, the Goonies plan to have one last adventure together. Unfortunately, Brand Walsh (Josh Brolin) fails his driver’s license test. This spoils his little brother Mikey’s (Sean Astin) plans to cruise the coast for the weekend. Instead, the rest of the Goonies: Mouth (Corey Feldman), Data (Ke Huy Quan), and Chunk (Jeff Cohen) show up to their house to hang out.

Elsewhere in town, Mama Fratelli (Anne Ramsey) along with her son, Francis (Joe Pantoliano)—both of whom have recently escaped jail themselves—break her son, Jake (Robert Davi), out of Clatsop County Jail. She drives off in their Jeep Cherokee XJ as the police take chase; shooting at them as they drive off. Eventually, they escape authorities through an ORV beach race where their Jeep blends in with the other drivers.

Now free from pursuit, they return to their hideout called the Lighthouse Lounge near Cannon Beach. From here, the Fratellis look to continue running their counterfeit money operation. However, the same day they break Jake free, two FBI agents arrive to the lounge and enter. They do not leave alive.

Back at the Walsh manor, everyone eventually makes it up to the attic to rummage through all of Mikey’s dad’s cool stuff. There they find an old newspaper clipping with a picture and story of local scavenger hunter Chester Copperpot. It says he went missing in the 1930s looking for One-Eyed Willie’s lost treasure. They also find a Spanish map with musical notes on the back, some sort of Copper Bones trinket that seems important, and an old doubloon.

With wild thoughts of adventure (and the possibility of saving everyone’s homes), Mikey convinces his friends to help him find One-Eyed Willie’s treasure—known from here on out as the rich stuff. The group manages to tie Brand up in his exercise equipment and ditch him so he doesn’t stop them. The boys then ride their bicycles down to Cannon Beach.

Using the coordinates written on the map (and holes in the doubloon), they figure the rich stuff is somewhere below that broken down seaside restaurant we know as the Lighthouse Lounge—unaware of course that anyone’s actually in the place.

However, previously in the morning, Chunk witnessed the police chase, and when he spots the Jeep with bullet holes in it, he gets very nervous, and wants to leave. The other boys figure it’s just typical Chunk lies, and ignore him.

The four go inside the deserted restaurant anyhow, and quickly meet the Fratellis. Thinking they’re just some dumb kids, Mama Fratelli tells them the restaurant’s closed. When that doesn’t work, she tries to scare them into leaving. That one mostly works, but Mikey says he needs to use the restroom first as a ruse to look around the place before the Fratellis kick them out. In the basement, Mikey finds some horrible creature chained to a chair. As his sheiks scare Mickey to death, Mama Fratelli grabs him and ushers him and the other boys out.

At this very moment, Brand catches up with the twerps, and makes them leave too. Outside, they meet up with Andy (Kerri Green), whom Brand has the hots for, and her bestie named Stef (Martha Plimpton). They show up after ditching Andy’s douche-bag boyfriend—and son of the Astoria Country Club’s chairman who wants the Goonie’s land—Troy Perkins (Steve Antin) after a drive where he kept trying to look up Andy’s skirt.

However, when the group spots the Fratellis from afar, they witness them put something resembling a dead FBI agent into the Jeep—only Chunk thinks it’s a body. Once the Fratellis drive off, Mikey convinces everyone to go back inside just to see if the rich stuff is really there. However, as they find the entrance to a tunnel that leads to an underground cavern, the Fratellis return—trapping them in the lounge. They all head down into the tunnel to hide except for Chunk who hides in a freezer loaded with tons of ice cream and the other dead FBI agent.

The Goonies then decide to use the cavern underneath the restaurant to escape, and send Chunk out to get help from the police. When nightfalls, he escapes the basement through a window undetected. Unfortunately for him, the Fratellis stumble upon him as they return from dumping the second body. Before Chunk knows it’s the Fratellis, he tells the driver all about them, and that he can identify each one. They kidnap the boy, and take him back to the lounge.

Back at the hideout, they interrogate him to learn where the other kids are, but only get irrelevant stories out of him. Jake, for his part, begins to like the kid. However, midway through, a pack of bats burst out of the entrance in the basement.

The Fratellis toss Chunk in the same room with the creature Mikey saw earlier. He turns out to be a third Fratelli brother named Sloth (John Matuszak) who suffers from a facial deformity and low intelligence, but he has super strength. The Fratellis leave the two tied up there, and enter the cavern.

The boys bond over a Baby Ruth

Soon Chunk sees that Sloth is hungry, and nervously tosses him a Baby Ruth to help, but misses. Sloth breaks himself free to get the candy. Now friends, he unties Chunk, and they head to the freezer for ice cream.

Chunk then calls the police for help, but they don’t believe him because well, he’s a teller of tall tales. As he tries to stop Sloth from going down into the cavern—who’s now enamored with his echo in it—the phone cord pops out to the wall, and the call disconnects from the police. Chunk follows after Sloth into the cavern as well.

Down below, the Goonies serendipitously encounter numerous booby traps One-Eyed Willy and his henchmen set. When they find Chester Copperpot’s skeleton, the kids want to go back, but Mikey says they made it farther than him, and they should continue on. They reluctantly agree—especially once they know the Fratellis are hot on their trail.

They eventually come to a large underground cavern with a lagoon that holds Willie’s still sea-worthy ship, the Inferno. As everyone fills their pockets with the rich stuff, Mikey finds Willie’s skeleton. He calls Willie the first Goonie, and leaves the jewels his corpse is staring at as a tribute to him.

Unfortunately, the Fratellis finally catch up to the group, and force them one by one to return any jewels, and then walk the plank. However, Chunk and Sloth next arrive, and the new pals save the day. Sloth rips off his shirt to reveal a Superman one underneath, and Francis and Jake are in deep shit! They try to subdue him, but fail Sloth ties them up instead. When Mama Fratelli tries to calm him down too, she winds up overboard.

With the Goonies off the ship, Mama Fratelli returns to it. The family steals all the treasure for themselves as Sloth jumps in the water too. However, when Mama Fratelli takes the share of treasure Mikey left for Willie, it sets off one last booby trap. The cavern begins to collapse all around them.

The Goonies flee through a hole in the cave that Sloth keeps propped with his back. They wind up on a beach at Cauldron Point. Two passing policemen spot them, and call in that they found the missing children.

As their relieved parents show up, the police also arrest the Fratellis as they escape the cavern. Chunk offers to take Sloth into his home, and his parents seem to have no problem with that.

Since Mikey let all the rich stuff slip away, he can’t help save his parent’s home from foreclosure. Now, Mr. Perkins (Curtis Hanson) shows up too with his son, Troy, to have Walsh sign those foreclosure papers. As Mr. Walsh is about to sign the homes away, their maid, Rosalita (Lupe Ontiveros), discovers Mikey’s marble bag in his jacket. It still contains a handful of jewels he took from the ship. His father quickly estimates their value is more than enough to save everyone’s homes, and tears up the papers.

As the families celebrate, they spot the unmanned Inferno sail away into the bright morning sea.