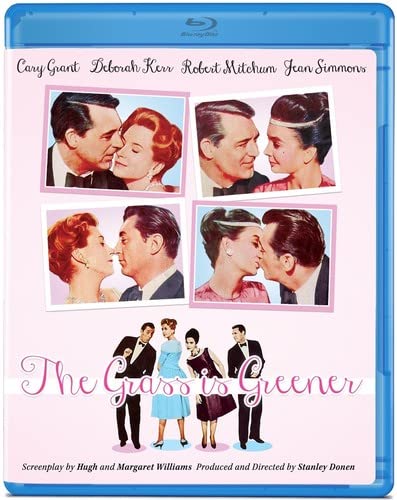 The Grass is Greener [Blu-ray]

‘The Grass Is Greener’ Movie Summary

When a struggling British earl opens his manor to the public, what he wants is some badly needed money… what he gets is a handsome American millionaire who sweeps the earl’s gorgeous wife off her feet. Encouraged by his wife’s chatterbox best friend, the jealous earl challenges his Yank rival to a duel. The romantic royal is fighting for love and honor, but he could lose something more – his life.

The Grass Is Greener was released in 1960 and was nominated for two Golden Globe Awards, Best Motion Picture (Comedy) and Best Actor (Comedy or Musical)(Grant).

On May 28, 2013, Olive Films released The Grass Is Greener on Blu-ray. Stanley Donen directed the film which starred Cary Grant, Deborah Kerr, and Robert Mitchum.