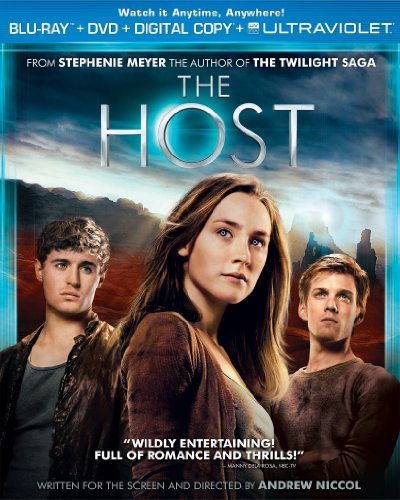 Universal Studios Home Entertainment has announced the Blu-ray/DVD/UltraViolet Combo Pack release of writer/director Andrew Niccol‘s The Host. The film stars Saoirse Ronan, Max Irons, Diane Kruger, Jake Abel, William Hurt, and Frances Fisher. It is based on the best-selling novel by “Twilight Saga” author Stephenie Meyer. The Host will be available online and in stores beginning on July 9th.

The Host is a riveting story about the survival of love and the human spirit in a time of war.  Our world has been invaded by an unseen enemy. Humans become hosts for these invaders, their minds taken over while their bodies remain intact. Most of humanity has succumbed. A parasitic alien soul is injected into the body of Melanie Stryder (Ronan).  Instead of carrying out her race’s mission of taking over the Earth, “Wanda” (as she comes to be called) forms a bond with her host and sets out to aid other free humans.

The Host was released in March of 2013 and grossed over $47 million in worldwide box office to date.

The Blu-ray edition of The Host features 1080p video, a DTS-HD Master Audio 5.1 surround track, and both a DVD and UltraViolet digital copy of the film. Special features include: Seeker PSA: Feature commentary with Meyer, Niccol, and producer Nick Wechsler; Bringing The Host To Life: Behind the scenes featurette with Meyer, Ronan, Irons, and Abel; and deleted scenes.

Disclaimer: Affiliate links are contained in this post. This means when you click a link, and purchase an item, Movie House Memories will receive an affiliate commission. Advertisers and Affiliate Partnerships do not influence our content. See our Terms of Use about the inclusion of affiliate links on this site for more information.
May 11, 2013
1 minute read
Show More
Back to top button
Close
Close