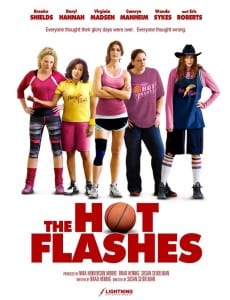 Vertical Entertainment has released a trailer for their upcoming comedy The Hot Flashes. The film is directed by Susan Seidelman and based on a screenplay by Brad Hennig. The comedy stars Brooke Shields, Wanda Sykes, Eric Roberts, Virginia Madsen, Daryl Hannah, and Camryn Manheim. The Hot Flashes is scheduled to be released in theaters on July 12th.

In the film, an unlikely basketball team of unappreciated middle-aged Texas women, all former high school champs, challenge the current arrogant high school girls’ state champs to a series of games to raise money for breast cancer prevention. Sparks fly as these marginalized women go to comic extremes to prove themselves on and off the court, and become a national media sensation.