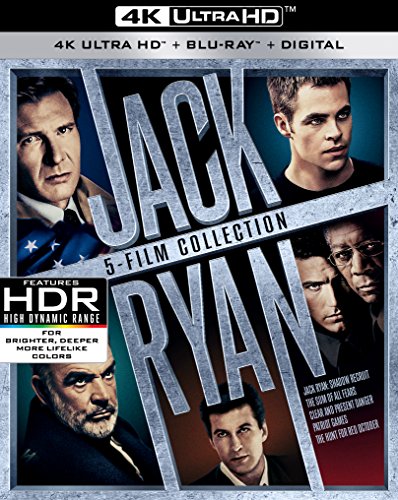 CIA recruit Jack Ryan is caught in a dangerous web of intrigue and espionage spun between a shadowy government agent his unsuspecting fiancée and a fearless Russian power broker. Jack must quickly evolve from soldier to analyst to full-fledged operative to stop a devastating terrorist plot against the United States. The stakes have never been higher in this thrill ride.

The Hunt For Red October seethes with high-tech excitement. A new technologically-superior Soviet nuclear sub, the Red October, is heading for the U.S. coast under the command of Captain Marko Ramius. The American government thinks Ramius is planning to attack. CIA analyst has a different idea: he thinks Ramius is planning to defect, but he has only a few hours to find him and prove it.

Jack Ryan discovers that the President’s wealthy friend was in league with a Colombian drug cartel. The President’s devious national security adviser and an ambitious CIA deputy director send a secret paramilitary force into Colombia to wipe out the drug lords, but the force is captured. It falls to Ryan to enter Colombia and rescue them, aided only by a renegade operative named Clark.

East-West tensions erupt when the CIA suspects that renegade Russian scientists are developing more nuclear weapons. Mobilized into action by CIA Director William Cabot, Jack Ryan comes to a shocking conclusion: terrorists plan to provoke a war between the U.S. and Russia – by detonating a nuclear bomb at a championship football game!

Former CIA analyst Jack Ryan has traveled to London to vacation with his wife and child. Outside of Buckingham Palace, Ryan thwarts a terrorist attack on Lord Holmes, but this act marks him as a target of the terrorist. Now Ryan has the most vital assignment of his life: saving his family.

Disclaimer: Please note that this post contains affiliate links. This means when you click a link and purchase an item, Movie House Memories may receive an affiliate commission at no additional cost to you. This bit of compensation helps keep content on our site free of charge to its readers. Advertisers and Affiliate Partnerships do not influence our content. See our Terms of Use about the inclusion of affiliate links on this site for more information.
October 15, 2021
2 minutes read
Show More
Back to top button
Close
Close