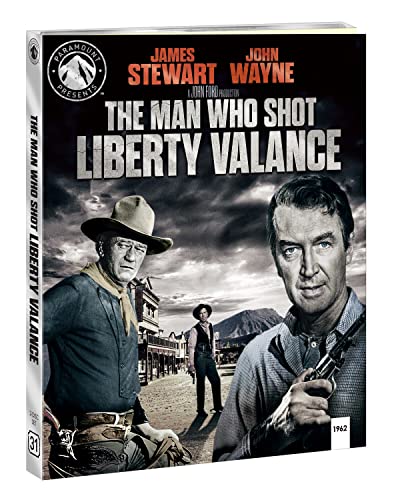 Senator Ransom Stoddard returns home to the town of Shinbone for the funeral of Tom Doniphon. When he meets a local newspaper reporter, he recounts his version of the events surrounding the shooting of Liberty Valance. Years ago, Stoddard arrived to town as a wet-behind-the-ears lawyer. Local hoodlum, Liberty Valance, robbed him of everything save a few law books fresh off the wagon. To survive, Stoddard took a job in the kitchen at the Ericson’s restaurant. It’s there he met his future wife, Hallie.

Meanwhile, the territory Shinbone resides in is applying for Statehood. The townsfolk select Stoddard as their representative over Valance even though Valance threatens them. When he destroys the local newspaper office, and attacks the editor, Stoddard has had enough. He calls Valance out, and guns shots roar from the night air. Valance falls to the ground; dead. Legend has it that Stoddard shot Valance, but sometimes legends aren’t exactly what they are made out to be.