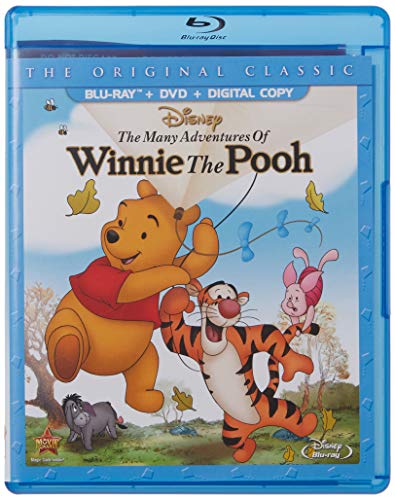 Walt Disney Home Entertainment has announced that they are adding Disney Animation’s 22nd feature, The Many Adventures of Winnie the Pooh, to their upcoming slate of Blu-ray. The film was directed by John Lounsbery and Wolfgang Reitherman and features the voice talents of Sebastian Cabot, Junius Matthews, Barbara Luddy, Howard Morris, John Fiedler, Sterling Holloway, and Paul Winchell. The animated musical is currently available for pre-order online and will be available in stores beginning on August 27th.

Celebrate the never-ending friendship that has delighted generations with Pooh’s first and most beloved feature film. Full of fun and heartwarming stories, this Academy Award-winning animated classic (Best Cartoon Short Subject, 1968, Winnie the Pooh and the Blustery Day) tells the tale of the first unforgettable meeting between Tigger (Winchell) and Pooh (Holloway). Your family will laugh along when Pooh gets stuck in Rabbit’s (Matthews) house from eating too much honey, and enjoy the lovable characters’ flurry of hilarious activity on a windy day. These timeless adventures are brought to life through extraordinary Disney animation and engaging songs and a digitally restored and remastered Blu-ray presentation. The Many Adventures of Winnie the Pooh was released in theaters in March of 1977.

The Many Adventures of Winnie the Pooh makes its high definition debut with a BD/DVD/Digital Copy combo pack. Special features include:

Walt Disney Home Entertainment has announced that they are adding Disney Animation's 22nd feature, The Many Adventures of Winnie the Pooh, to their upcoming slate of Blu-ray.