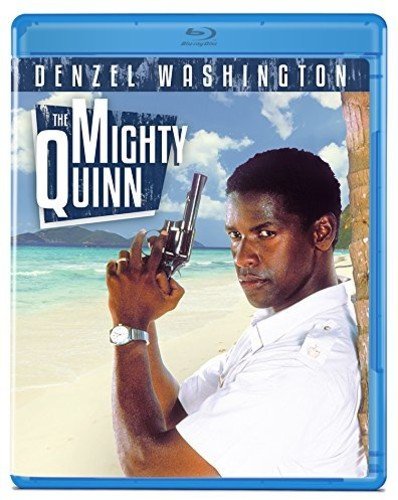 Olive Films has announced that they will release the 1989 crime drama The Mighty Quinn onto Blu-ray. The film was directed by Carl Schenkel and starred Denzel Washington, Robert Townsend, James Fox, Mimi Rogers, and M. Emmet Walsh. The Mighty Quinn will be available for purchase online and in stores beginning on September 22nd.

Under bright skies and sandy beaches, paradise hides some ugly truths in The Mighty Quinn. Based on the A.H.Z. Carr novel “Finding Maubee”, Denzel Washington brings his charismatic star power to the role of Xavier Quinn, the sheriff of a small Caribbean island caught up in a murder mystery involving his best friend. Petty crook Maubee (Townsend) is on the run for the alleged murder of millionaire resort owner Donald Pater (Bobby Ghisays). Estranged from his wife Lola (Sheryl Lee Ralph) and an absentee father to his son, Quinn is about to find his life getting a bit more complicated as the mystery of the millionaire’s murder slowly comes into focus in the witty, entertaining mystery-thriller, The Mighty Quinn.

The Mighty Quinn was released February 17, 1989 and went onto gross over $4 million at the box office.

Here is the theatrical trailer for The Mighty Quinn, courtesy of kegorogers.

Disclaimer: Affiliate links are contained in this post. This means when you click a link, and purchase an item, Movie House Memories will receive an affiliate commission. Advertisers and Affiliate Partnerships do not influence our content. See our Terms of Use about the inclusion of affiliate links on this site for more information.
July 29, 2015
1 minute read
Show More
Back to top button
Close
Close