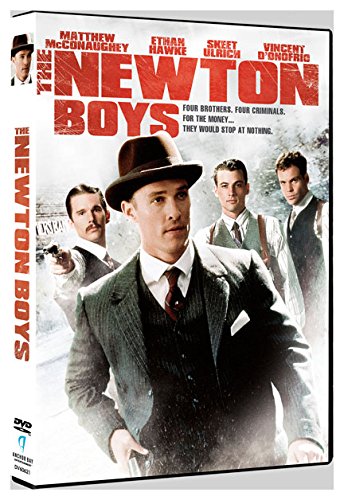 Anchor Bay has announced that they are releasing 20th Century Fox Home Entertainment’s The Newton Boys onto Blu-ray this May. The film was directed by Richard Linklater and starred Matthew McConaughey, Skeet Ulrich, Ethan Hawke, Gail Cronauer, Vincent D’Onofrio, Julianna Margulies, and Dwight Yoakam. The Newton Boys will be available online and in stores beginning May 28th.

The Newton brothers (McConaughey, Ulrich, Hawke and D’Onofrio) belong to a poor farmer family in the 1920’s. The oldest of them, Willis, one day realizes that there’s no future in the fields and suggests he and his brothers become bank robbers. Soon the family agrees, not just becoming small-time crooks but famous robbers who, five years later, execute the greatest train robbery in American history.

The Newton Boys was released in March of 1998 and grossed over $10 million in worldwide box office.

Disclaimer: Affiliate links are contained in this post. This means when you click a link, and purchase an item, Movie House Memories will receive an affiliate commission. Advertisers and Affiliate Partnerships do not influence our content. See our Terms of Use about the inclusion of affiliate links on this site for more information.
April 22, 2013
1 minute read
Show More
Back to top button
Close
Close