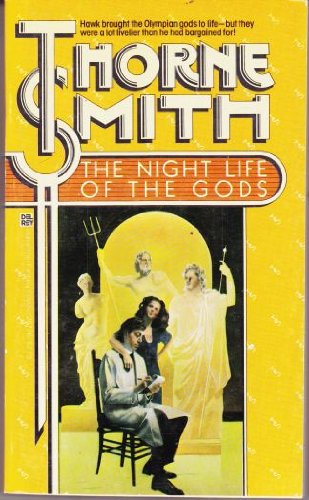 Night Life of the Gods

Thorne Smith’s rapid-fire dialogue, brilliant sense of the absurd, and literary aplomb put him in the same category as the beloved P. G. Wodehouse. The Night Life of the Gods—the madcap story of a scientist who instigates a nocturnal spree with the Greek gods—is arguably his most sparkling comedic achievement.

‘The Night Life of the Gods’ Synopsis

Hunter Hawk has a knack for annoying his ultrarespectable relatives. He likes to experiment and he particularly likes to experiment with explosives. His garage-cum-laboratory is a veritable minefield, replete with evil-smelling clouds of vapor through which various bits of wreckage and mysteriously bubbling test tubes are occasionally visible.

With the help of Megaera, a fetching nine-hundred-year-old lady leprechaun he meets one night in the woods, he masters the art (if not the timing) of transforming statues into people. And when he practices his new witchery in the stately halls of the Metropolitan Museum of Art—setting Bacchus, Mercury, Neptune, Diana, Hebe, Apollo, and Perseus loose on the unsuspecting citizenry of Prohibition-era New York—the stage is set for Thorne Smith at his most devilish and delightful.

Born in Annapolis, Maryland, in 1892, educated at Dartmouth, THORNE SMITH was an early cohort of Dorothy Parker’s. He achieved literary success in 1926 with the publication of Topper and went on to publish nine novels in the next eight years. He earned a passionate following among both critics and readers before his death, at the age of forty-two, in 1934.

Add it to your collection at Amazon.com and iTunes

Thorne Smith's rapid-fire dialogue, brilliant sense of the absurd, and literary aplomb put him in the same category as the beloved P. G. Wodehouse.