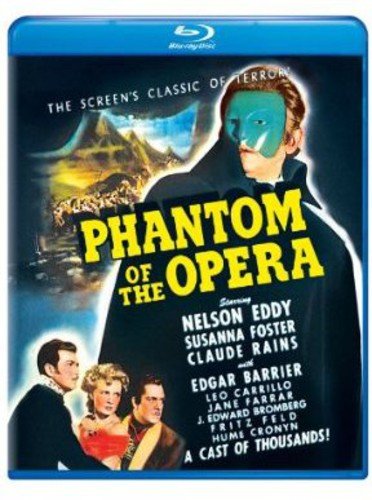 Universal Studios Home Entertainment has announced the Blu-ray release of Phantom of the Opera (1943). The film had previously only been available as part of the Universal Classic Monsters Essentials Collection box set, which included The Mummy (1932), The Invisible Man (1933), Phantom of the Opera (1943) and Creature from the Black Lagoon (1954). The Mummy was directed by Arthur Lubin and starred Nelson Eddy, Susanna Foster, Claude Rains, and Edgar Barrier. The horror classic will be available in stores and online beginning on June 4th.

One of the most popular stories of all time, Gaston Leroux’s The Phantom of the Opera is the legendary horror tale of the masked Phantom of the Paris Opera House. Following a tragic accident that leaves him disfigured, crazed composer Erique Claudin (Rains) transforms into a masked phantom who schemes to make beautiful young soprano Christine Dubois (Foster) the star of the opera and wreak revenge on those who stole his music. A heroic baritone (Eddy) tries to win the affections of Christine as he tracks down the disfigured “monster” who has begun murdering those who resist his mad demands. Inspired by the original 1925 silent film, this lavish Technicolor production remains one of the most unforgettable adaptations ever to be filmed.

The Blu-ray edition of Phantom of the Opera features a DTS-HD Master Audio 2.0 Mono track and will contain several special features, including: a feature commentary with film historian Scott MacQueen; The Opera Ghost: A Phantom Unmasked featurette; production photographs; and 100 Years of Universal: The Lot featurette.

Disclaimer: Affiliate links are contained in this post. This means when you click a link, and purchase an item, Movie House Memories will receive an affiliate commission. Advertisers and Affiliate Partnerships do not influence our content. See our Terms of Use about the inclusion of affiliate links on this site for more information.
April 29, 2013
1 minute read
Show More
Back to top button
Close
Close