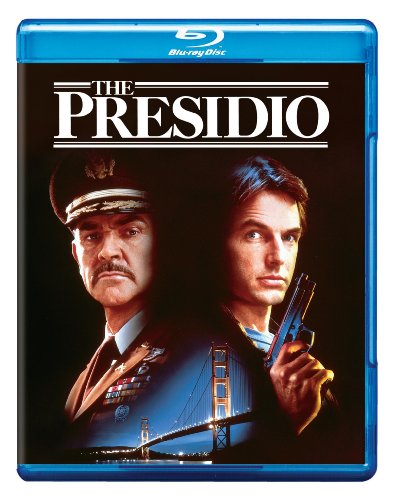 Warner Bros. Home Entertainment has announced the addition of the mystery thriller The Presidio to their upcoming slate of Blu-ray releases. The film is directed by Peter Hyams and stars Sean Connery, Mark Harmon, Meg Ryan, Jack Warden, and Mark Blum. The Presidio will be available for purchase online and in stores beginning on August 13th.

In the film, Lt. Col. Caldwell (Connery) and Police Inspector Jay Austin (Harmon) don’t like each other. Not even a little bit. That’s because Caldwell helped run Austin out of the military police a few years back. And now these natural enemies are forced to team up to solve a brutal murder at The Presidio military compound.To make matters worse, Inspector Austin has taken a sudden and passionate interest in a beautiful, feisty young woman (Ryan), who just happens to be Lt. Col. Caldwell’s daughter. First, sparks fly between the young lovers. Then fists and bullets start flying as this action-packed thriller kicks into high gear and tears up the streets of San Francisco.

The Presidio was released in June of 1988 and grossed over $20 million at the box office.

Disclaimer: Affiliate links are contained in this post. This means when you click a link, and purchase an item, Movie House Memories will receive an affiliate commission. Advertisers and Affiliate Partnerships do not influence our content. See our Terms of Use about the inclusion of affiliate links on this site for more information.
June 6, 2013
1 minute read
Show More
Back to top button
Close
Close