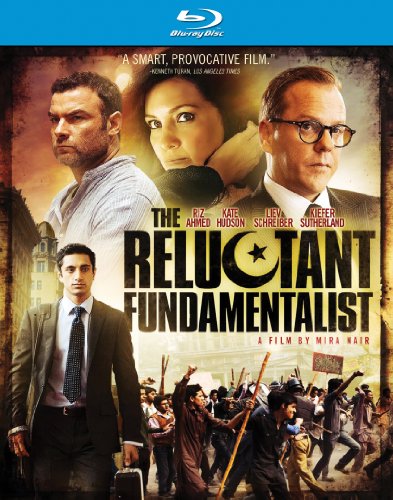 IFC Films and MPI Home Video has announced the addition of the drama thriller The Reluctant Fundamentalist to their upcoming slate of Blu-ray releases. The film is the latest from Monsoon Wedding director Mira Nair and stars Riz Ahmed, Liev Schreiber, Kiefer Sutherland, and Kate Hudson. The Reluctant Fundamentalist is currently available for pre-order online and will be available everywhere beginning on August 27th.

Based on the novel by Moshin Hamid, The Reluctant Fundamentalist is set in 2010 against student demonstrations raging in Lahore. There, a young Pakistani professor Changez Khan (Ahmed) is interviewed by American journalist Bobby Lincoln (Schreiber).

Princeton-educated Changez tells Lincoln of his past as a brilliant business analyst on Wall Street. He talks of the glittering future that lay before him, his mentor, Jim Cross (Sutherland), and the beautiful and sophisticated Erica (Hudson), with whom he was set to share that future.

In the aftermath of 9/11, the alienation and suspicion he is suddenly met with leads him back to his homeland, and the family to whom he is very close. Charisma and intelligence catapult him to become a leader both in the eyes of the Pakistani students that adore him, and the American government that suspects him.

The collegial pretense of the meeting in a Lahore tea house, between Lincoln and Changez, slowly gives way to why the unlikely pair is meeting on a summer day—a foreign professor has been kidnapped by extremists, and the clock is ticking toward the deadline for his execution. Changez’s family is being harassed and is in real danger. Bobby listens carefully, but with an agenda of his own. Leading us through the culturally rich and beguiling worlds of New York, Lahore and Istanbul, The Reluctant Fundamentalist is an exploration of bias nd the phenomenon of globalization that is both brilliant and unsettling.

The Blu-ray will include a making of featurette and the original theatrical trailer as part of the special features.

Disclaimer: Affiliate links are contained in this post. This means when you click a link, and purchase an item, Movie House Memories will receive an affiliate commission. Advertisers and Affiliate Partnerships do not influence our content. See our Terms of Use about the inclusion of affiliate links on this site for more information.
July 26, 2013
2 minutes read
Show More
Back to top button
Close
Close