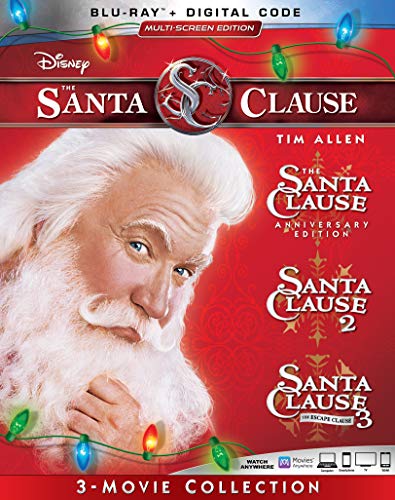 Scott Calvin is a divorced father who sometimes fails at meeting his son’s expectations. Scott is dismayed to learn that his ex-wife and her new husband are trying to convince his young son, Charlie, that there is no Santa Clause. However, on Christmas Eve, Scott and Charlie accidentally startle Santa Claus while he is delivering gifts on a high roof, resulting in Santa’s death. Instructed by a mysterious card to put on Santa’s suit, Scott inadvertently enters into the “Santa Clause” which will change both Scott and Charlie’s lives forever.

Scott Calvin has been Santa Claus for the past eight years, and his loyal elves consider him the best Santa ever. But he’s got problems, such as a mysterious weight loss, and then he discovers that his son Charlie has landed on this year’s “naughty” list. Desperate to help his son, Scott heads back home, putting a substitute Claus in charge of the North Pole. But when the substitute institutes some strange redefinition of naughty and nice that put Christmas at risk, Scott must return with a new bag of magic to save Christmas.

Scott Calvin has the weight of the world on his shoulders. It’s only a few days before Christmas and the elves are behind on production of toys for the children of the world. Carol is pregnant and is about to give birth to her and Scott’s first child. To make matters worse, Scott has invited Carol’s parents to the North Pole to support her during her pregnancy, but he has everyone working not to reveal that he is Santa Claus to them. Meanwhile, Jack Frost is hatching a plan to become Santa Claus himself and take over the holiday. All he has to do is convince Scott that the world would be better if he was never Santa, and with all of Scott’s problems, that maybe easy to do.

Disclaimer: This post contains affiliate links. This means when you click a link, and purchase an item, Movie House Memories will receive an affiliate commission. Advertisers and Affiliate Partnerships do not influence our content. See our Terms of Use about the inclusion of affiliate links on this site for more information.
October 10, 2020
245 2 minutes read
Show More
Back to top button
Close
Close