Maria wanted to be a nun ever since she was a little child, but she grew up with a free spirit that doesn’t fit in well with her strict convent. That doesn’t stop her from joining, and after some troubles, the Mother Abbess sends her to govern seven children whose father is in need of some help. He’s a wifeless widower, and quite strict with his rules. Maria however decides to bring music and happiness into the household, and soon even the children’s father falls in love with the woman. 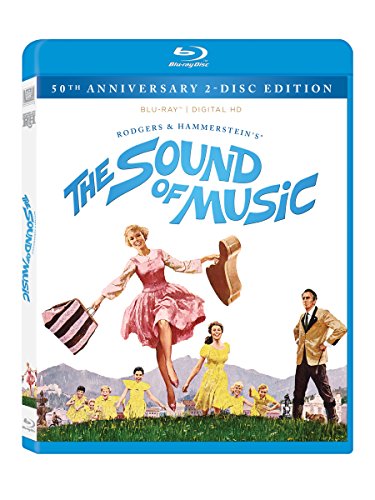 ‘The Sound of Music’ Movie Summary 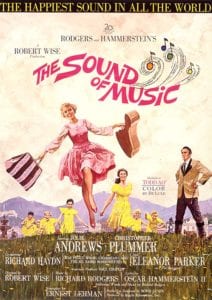 It’s 1938, and the hills are alive with The Sound of Music. Maria is a young Austrian at Nonnberg Abbey in Salzburg. The stodgy old nuns at her abbey scoff at her love of music and the mountains. The Mother Abbess believes Maria would be much happier outside it, and she sends Maria to the villa of retired naval officer Captain Georg von Trapp. There, she will be the governess for his seven children.

Since the death of the Captain’s wife, he’s been stuck raising his kids the only way he knows how — through strict military discipline. The kids test Maria at first, and act up, but when she responds to them with kindness and patience, the quickly come to trust her. After Maria helps Liesl sneak back into her house after meeting with a boy named Rolfe, Maria earns her trust too.

The Captain has to leave for Vienna, and Maria helps make them clothes, and plays with them in the mountains. There, she teaches them to sing. When the Captain returns home, he brings the wealthy Baroness Elsa Schraeder and their friend Max Detweiler with him.

He’s embarrassed when Maria returns with his kids soaking wet after their boat overturns in the lake. Their clothes and playtime activities angers him greatly. Maria suggests he get closer to his children, but the Captain doesn’t like that suggestion. He orders her back to the abbey instead. Suddenly though, he hears his children singing for the Baroness in the house, and is amazed they are doing it so beautifully. The Captain joins in with them. Realizing his mistake, the Captain apologizes to Maria, and asks her to stay.

Max too is impressed, and he suggests the Captain enter them in the upcoming Salzburg Festival. The Captain quickly shoots down that idea. He’s opposed to them singing in public. However, he does agree to organizing a large party at his villa for them to sing.

On the night of the party, the Captain’s children watch the guests waltz from the garden terrace. The Captain spots Maria teaching Kurt a traditional Ländler folk dance. He smoothly cuts in, and gracefully dances with Maria. After an awkward embrace, Maria blushes and then walks away.

The Baroness, ever jealous, sees the Captain’s growing attraction to Maria. She can’t have that if she’s going to end up with him! So, she convinces Maria it’d be best if she returns to the Abbey…which she does.

Mother Abbess soon learns that Maria has real feelings for the Captain, and she encourages her to return to the villa as she belongs there. Maria takes her advise, but once she returns, she learns the Captain’s now engaged to the Baroness. Maria agrees to stay until they find a her replacement. Clearly though, the Captain’s feelings for Maria haven’t changed. He breaks off his engagement with the Baroness, and marries Maria.

When the Captain and Maria leave on their honeymoon, Max sneaks off, and enters the children in the Salzburg Festival anyway. However, at this time, the Third Reich in the Anschluss annexes Austria. The newlyweds return home to find a telegram waiting for the Captain. He must report to the German Naval base at Bremerhaven to accept a commission in the German Navy.

He’s vehemently opposed to both the Nazis and the Anschluss. So the Captain immediately prepares his family to leave for Switzerland. However, many of their friends accept the new regime, including Rolfe, who joins the Hitler Youth.

That night, as the Captain’s family tries to leave, a group of Brownshirts waiting outside the villa stops them. Gauleiter Hans Zeller questions the Captain, and the Captain tells Zeller they are just headed to the Salzburg Festival to perform. Delighted, Zeller escorts them to it. Afterwards, he and his men will take the Captain to Bremerhaven.

At the festival that night, the whole family slips away during their final number. They seek shelter at the nearby abbey, where the nuns hide them in the cemetery crypt. Brownshirts arrive, and search the abbey. It’s there Rolfe discovers the family.

However, when he sees Liesl with them, he doesn’t raise the alarm until the family has enough time to flee. They then escape using the caretaker’s car. When the soldiers try to go after them, they discover their cars will not start since the nuns sabotaged the car’s engines. The next morning, after driving to the Swiss border, the entire family makes their way on foot across the frontier into Switzerland and safety.

User Rating: Be the first one !
May 17, 2019
4 minutes read
Show More
Back to top button
Close
Close