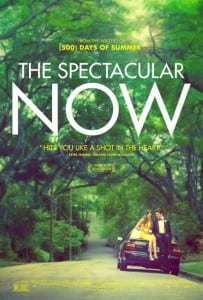 A24 has released a new trailer for their upcoming dramedy The Spectacular Now. The film is directed by James Ponsoldt and stars Shailene Woodley, Miles Teller, Jennifer Jason Leigh, Mary Elizabeth Winstead, Brie Larson, Kyle Chandler, and Bob Odenkirk. The Spectacular Now is scheduled for a limited release in theaters beginning on August 2nd.

In the film, Sutter Keely (Teller) lives in the now. It’s a good place for him. A high school senior, charming and self-possessed, he’s the life of the party, loves his job at a men’s clothing store, and has no plans for the future. A budding alcoholic, he’s never far from his supersized, whiskey-fortified thirst-master cup. But after being dumped by his girlfriend, Sutter gets drunk and wakes up on a lawn with Aimee Finicky (Woodley) hovering over him. She’s different: the “nice girl” who reads science fiction and doesn’t have a boyfriend. While Amy has dreams of a future, Sutter lives in the impressive delusion of a spectacular now, yet somehow, they’re drawn together.