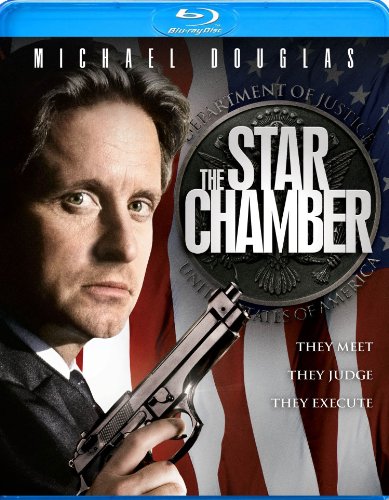 Anchor Bay has announced that they are releasing 20th Century Fox Home Entertainment’s The Star Chamber onto Blu-ray this May. The film was directed by Peter Hyams and starred Michael Douglas, Hal Holbrook, Yaphet Kotto, Sharon Gless, and Don Calfa. The Star Chamber will be available online and in stores beginning May 28th.

In the film, disgusted with criminals escaping the judicial system via technicalities (most recently two men accused of raping and murdering a young boy), an idealistic young Superior Court judge named Steven Hardin (Douglas) investigates an alternative method for punishing the guilty. Soon Hardin approaches another judge (Holbrook), who tells him about a group of rogue judges who operate outside of the law and exact vigilante justice.

The Star Chamber was released in August of 1983 and grossed over $5 million in worldwide box office.

Disclaimer: Affiliate links are contained in this post. This means when you click a link, and purchase an item, Movie House Memories will receive an affiliate commission. Advertisers and Affiliate Partnerships do not influence our content. See our Terms of Use about the inclusion of affiliate links on this site for more information.
April 27, 2013
1 minute read
Show More
Back to top button
Close
Close