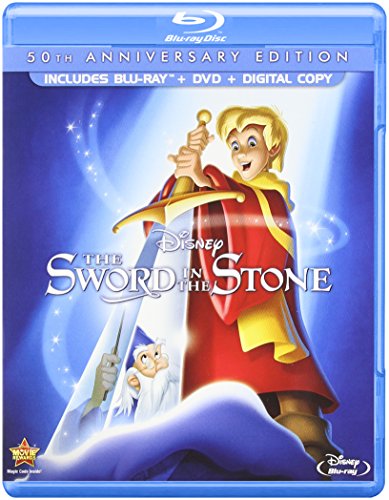 The Sword in the Stone (50th Anniversary Edition) [Blu-ray]

Walt Disney Home Entertainment has announced that they are adding the 50th Anniversary Edition of The Sword in the Stone to their upcoming slate of Blu-ray releases. The film is directed by Wolfgang Reitherman and features the voice talents of Sebastian Cabot, Karl Swenson, Rickie Sorensen, Junius Matthews, and Norman Alden. The Sword in the Stone: 50th Anniversary Edition will be available for purchase online and in stores beginning August 6th.

The 1963 animated adaptation of the T.H. White novel of the same name was Walt Disney Animation’s 18th feature. Take an amazing journey with a young orphan named “Wart” and the extraordinary wizard Merlin (Swenson). According to legend, only someone with the purest character and inner strength can pull the enchanted sword from the stone and claim the throne of England. Armed with newfound confidence and the power of friendship, Wart discovers his destiny and learns the best magic is the kind you find inside yourself.

The Sword in the Stone is being made available via Blu-ray/DVD/Digital Copy and BD/DVD combo packs, and presented in 1080p with DTS-HD Master Audio 5.1 surround. Special features include: a new alternative opening: Walt Meets Merlin; an original classic DVD release bonus features; Music and Magic: The Sherman Brothers featurette; Sing-along with The Movie feature; All About Magic excerpt; A Knight for a Day featurette; and a Brave Little Tailor feature.

Disclaimer: Affiliate links are contained in this post. This means when you click a link, and purchase an item, Movie House Memories will receive an affiliate commission. Advertisers and Affiliate Partnerships do not influence our content. See our Terms of Use about the inclusion of affiliate links on this site for more information.
June 11, 2013
498 1 minute read
Show More
Subscribe
Login
0 Comments
Inline Feedbacks
View all comments
Most Recent Posts
Facebook Twitter LinkedIn Tumblr Pinterest Reddit
Back to top button
Close
wpDiscuz
0
0
Would love your thoughts, please comment.x
()
x
| Reply
Close