Billie Holiday is one of the most influential singers of the 20th century. However, as with many artists, Billie is a troubled singer, haunted by the memories of her tragic childhood and her overpowering drug addiction. FBI Agent Harry J. Anslinger begins a decade long quest to destroy Billie and her career. He uses former soldier Jimmy Fletcher to infiltrate and gather intelligence on Billie. However, Jimmy and Billie begin to fall for each other even as Billie fights for her career and her life. 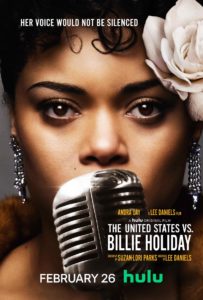 The film begins in 1957 with an older Billie Holiday (Andra Day) being interviewed by the flamboyant Reginald Lord Devine (Leslie Jordan) in New York City. Reginald is a fan, but insensitive, asking questions about Billie’s thoughts on being colored and her controversial song “Strange Fruit”, a song about a lynching. Eventually, the interview takes Billie back to Café Society, the place where Billie began her professional career ten years before.

Billie Holiday is an established star who is managed by a crooked manager by the name of Joe Glaser (Dusan Dukic). One night, Glaser is present with Billie’s husband Monroe (Erik LaRay Harvey) during one of Billie’s performances. Solider Jimmy Fletcher (Trevante Rhodes) is present in the audience. Jimmy is a huge fan of Billie’s, but he is prevented from seeing her by the controlling Monroe. Billie struggles with the control of her act, as Glaser and Monroe constantly pressure her not to sing “Strange Fruit” as part of her act. The pressures of her career cause Billie to turn to drugs, specifically heroin.

Some of the pressure for not singing the song comes from FBI Agent Harry J. Anslinger (Garrett Hedlund). Anslinger pressures Glaser and Monroe to influence Billie not to sing the song under the pretense that it could incite a riot. Anslinger even personally monitors Billie’s performances to further discourage Billie from performing the song. The constant stress pushes Billie further into her drug addiction.

One day, Jimmy visits Billie while Monroe is not around. Billie is busy getting high when Jimmy enters. When Jimmy inquires why she does not sing “Strange Fruit”, Billie explains that she must be high to sing that song. Jimmy and Billie flirt with each other throughout their first meeting.

Back at the interview in 1957, Reginald asks Billie about her relationship with Tallulah Bankhead (Natasha Lyonne), a wealthy woman who Billie is romantically linked with. Billie flashes back to an incident at a hotel where she was not allowed onto an elevator with Tallulah. Billie is directed to take the service elevator by the African American elevator operator. Her pride hurt, Billie storms out of the hotel and away from Tallulah. That night, high on drugs, Billie takes the stage and begins to perform “Strange Fruit” with an audience that is filled with police officers. Her band quickly carries her from the stage to prevent her from being arrested. Later that night, Billie is getting high in a friend’s hotel room when Jimmy shows up at the door. It is revealed that Jimmy works for the FBI, and he has come to arrest her.

Shortly thereafter, Billie makes an appearance in court after she has taken a plea where the Judge questions her as to the source of her drugs. Billie refuses to answer the question and the Judge sentences her to prison for one year and one day. Billie detoxes in prison, while Jimmy’s career begins to soar. However, Jimmy’s mother (Adriane Lenox) disapproves of his career path, believing that Billie is a hero for all black people. Jimmy begins to regret his involvement in Billie’s arrest and conviction.

Anslinger continues to try to destroy Billie while she is prison. He seeks Jimmy’s help in preventing her from getting her cabaret license back. He asks Jimmy to go and apologize to Billie and win back her trust. Jimmy visits Billie, but he tells her what Anslinger is trying to do. Once Billie is released, she gets a gig at Carnegie Hall. Billie begins rehearsing and working out to get herself ready for the performance. The show is a huge success, but Billie is unable to get her cabaret license back due to Anslinger’s interference. Eventually, Billie is approached by a promoter, John Levy (Tone Bell) who manages to get Billie’s some additional gigs by paying off the police.

At the same time, Jimmy begins to become frustrated with working for Anslinger. He believes that his boss has him investigating and surveilling black entertainers because they threaten the status quo. Meanwhile, Billie tours the country with Levy, who feeds her drug habit and keeps a large portion of her money. Billie’s band and entourage begin to become bitter when they do not get paid. Levy gets into trouble with the law and agrees to try to frame Billie by planting drugs on her. Jimmy is part of the group that arrests Billie. At the trial, Jimmy purposefully muddles his testimony which allows Billie to escape a conviction. As a punishment, Anslinger places Jimmy on the road with the purpose of surveilling Billie as she continues her cross-country tour. Anslinger also sends another agent to surveil Jimmy.

While on tour, Jimmy and Billie become romantically involved. Billie begins to open up to Jimmy and explains her tragic past, including her childhood living in a whorehouse where her mother worked. Jimmy keeps Billie clean and reports in to Anslinger that Billie is no longer using drugs. The reports frustrate Anslinger, but he continues the surveillance anyways. However, Billie eventually self-destructs and abandons Jimmy and her band on the road in the deep south. She runs off with Louis McKay (Rob Morgan) who books performance dates for Billie and provides her with drugs.

Billie falls into a spiral of drugs and self-destruction. Eventually, Jimmy returns and saves her from Louis. However, Billie’s health continues to decline until she is forced into a hospital. Approaching death, Billie once again rejects Jimmy’s help, even as he attempts to protect her from Anslinger. Billie’s husband returns, and it is implied that he plants drugs on her again. Anslinger shows up at Billie’s hospital room and asks Billie to reveal her drug sources in exchange for a deal. Billie rejects his offer, and she is placed under arrest and handcuffed to her bed. Billie dies a short time later.

The epilogue talks about the effect of Billie’s music on the world, and how “Strange Trees” was considered one of the most important songs of the 20th Century.