A fictional tale of two historical figures, legendary crime boss Al Capone and federal agent Eliot Ness. In 1930’s Chicago during Prohibition, Capone rules the city with an iron fist and controls the flow of illegal alcohol. Ness is tasked with stopping and arresting the infamous gangster. After a rough start, Ness eventually gathers a group of men around him that he can trust and rely on for his war on crime. However, will Ness stay true to his convictions and moral code when he faces opposition from a man who will do anything to stay in power? 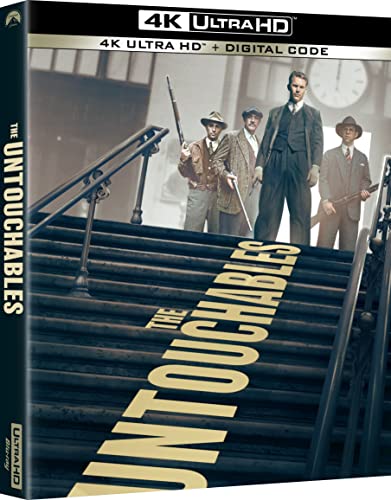 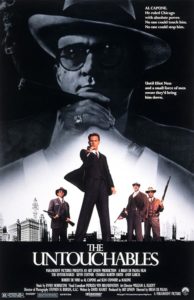 The year is 1930 and Prohibition is in full swing. The bootlegging world of Chicago is ruled by notorious gangster Al Capone (Robert DeNiro), who not so secretly controls most of the legal and illegal enterprises in the Windy City. The Bureau of Prohibition dispatch forthright agent Eliot Ness (Kevin Costner) to Chicago with the task of halting Capone’s illegal activities. However, Ness underestimates the corruption within the police force and soon finds that his efforts will always be thwarted by stole-y cops on the take.

Ness has a chance encounter with a veteran, Irish American, beat cop named Jimmy Malone (Sean Connery). Malone gives the inexperienced Ness some sound advice, which leads Ness to offering Malone a chance to join his elite squad. Although Malone despises the corruption in the city, he hesitates before ultimately joining Ness’ crusade. Malone instructs Ness not to use trained police officers, and the two men head off to the police academy where they successfully recruit crack shot, Italian American trainee George Stone (real name Giuseppe Petri) (Andy Garcia). Once back at the station, Ness learns that the bureau has sent accountant Oscar Wallace (Charles Martin Smith) to assist him in his investigations.

Once together, the four men successfully raid a Capone liquor warehouse in the City Public Library across the street from the police station. Ness is flabbergasted as to the location of Capone’s whiskey storage, but Malone explains to him that everyone knows where the alcohol is, it’s just a question of who wants to take on Capone. The raid garners Ness and his men positive press and the newspapers dub Ness and his men “The Untouchables”. However, Ness’ success draws the anger of Capone, who kills the gangster in charge of the raided warehouse as a warning to his other men. He then proceeds to attempt to bribe Ness by using one of the city’s Aldermen (Del Close) as the go between. Ness refuses the bribe and vows to the city official to take Capone down.

Wallace begins looking at Capone’s financial records and discovers that Capone has not filed an income tax return in four years. Wallace suggests building an income tax evasion case against the gangster, which causes Ness and Malone to roll their eyes. Later, Ness and his family are threatened by one of Capone’s henchmen, Frank Nitti (Billy Drago). Ness gets his pregnant wife (Patricia Clarkson) and daughter (Kaitlin Montgomery) safely out of town, and Malone informs Ness that he has received intel from a secret source that Capone is going to be bringing a shipment of alcohol in from the Canadian border. Capone and his men fly up to the border and work in tandem with the Canadian Mounties. The border raid is a success, and Ness and his men seize Capone’s whiskey shipment and his bookkeeper named George (Brad Sullivan). Wallace finds a records book with detailed payments to various people. Wallace informs Ness that if they can get George to identify any monies that are being provided to Capone that they can arrest Capone for income tax evasion. Malone uses a ruse to trick George into cooperating.

Once back in Chicago, the District Attorney (Clifton James) announces plans to indict Capone. Wallace is charged with escorting George to a secret location for the bookkeeper’s protection. Nitti dresses as a police officer and executes George and Wallace by shooting them both in the head. Ness becomes enraged at Capone’s brutal response and rushes to Capone’s home at the Lexington Hotel to confront the gangster over the murders. Malone intervenes and stops Ness from getting into a gunfight with Capone’s men. Once back at the station, the District Attorney informs Ness that he is going to drop the case against Capone for a lack of witnesses. Malone tells Ness to stall the DA so that he can find out information on the location of Capone’s head bookkeeper, Walter Payne (Jack Kehoe).

Later that night, Malone is tending his injuries at home when he is attacked by a knife-wielding enforcer of Capone’s employee. Malone easily handles the hitman, but he is caught unaware by Nitti who guns Malone down. Ness and Stone arrive just after the shooting to find a nearly dead Malone telling them to head to the train station to stop Payne from leaving town. Malone dies right after he demands to know from Ness what he is prepared to do to stop Capone. Ness and Stone head to the train station to apprehend Payne. The pair engage in a shootout with several of Capone’s men who Ness catches unaware. Stone kills the last henchman who attempts to use Payne as a human shield. Payne agrees to cooperate with Ness’ investigation.

Several weeks later, Payne is testifying at Capone’s trial. Ness and the DA observe Capone appear to be uninterested in the trial. Ness observes Nitti wearing a gun in the courtroom and has the baliff escort him of court. While searching Nitti, Ness discovers evidence on the hitman that implicates him in Malone’s murder. Nitti shoots the baliff and attempts to escape from the courthouse via the roof. Ness follows him. At one point, Ness has the opportunity the kill a defenseless Nitti, but he decides against it, sticking to his moral code. A few minutes later, Nitti admits to killing Malone and insults the memory of Ness’ deceased mentor. Nitti tells Ness that he will never be convicted for Malone’s murder. Ness responds by throwing Nitti off the roof of the courthouse, killing the criminal.

When Ness returns to the courtroom, Stone informs him that Nitti has a list of all the jurors in Capone’s case and amounts that they have been paid. When the DA and Ness attempt to convince the Judge (Tony Mockus Jr.) to declare a mistrial, the Judge refuses. Ness asks to speak with the Judge alone. A few moments later, the Judge orders his baliff to replace the jury with a jury from another courtroom which effectively destroys Capone’s bribery efforts. The DA asks Ness what he said to the Judge and Ness tells them that he told the Judge that his name was in Capone’s record book. The DA tells Ness that is not true, but Ness states that he knows, implying that Ness gambled that the Judge was on the take. Chaos ensues in the courtroom as an enraged Capone demands justice. Capone’s attorney (Will Zahrn) suddenly requests to change Capone’s plea to guilty. Capone punches out his attorney and exchanges words with Ness, who leaves the courtroom victorious.

Capone is later convicted of tax evasion and sentenced to eleven years in prison. Ness closes down his office and says goodbye to Stone, the last surviving member of the Untouchables. Ness gives Stone Malone’s St. Jude medallion and his callbox key as a farewell present. As Ness leaves the police station, he is approached by a reporter who asks the federal agent what he will do if they repeal prohibition. Ness smiles and says he will have a drink.

User Rating: Be the first one !
May 11, 2022
5 minutes read
Show More
Back to top button
Close
Close