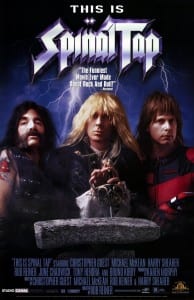 This Is Spinal Tap was only a modest success upon its initial release.  Audience feedback cards from early screenings had comments such as “Too shaky. Get new cameraman.” However, the film found greater success, and a cult following, after it was released on video.

Since its release, This Is Spinal Tap has received universal acclaim from critics and is widely regarded as one of the best films of 1984.  Roger Ebert of the Chicago Sun-Times gave the film 4 stars out of 4 and wrote “This Is Spinal Tap is one of the funniest, most intelligent, most original films of the year.  The satire has a deft, wicked touch.  Spinal Tap is not that much worse than, not that much different from, some successful rock bands.”  Ebert later placed the film on his ten best list of 1984.  The film currently holds a 96% “Certified Fresh” rating on the review aggregate website Rotten Tomatoes.  In 2002, This Is Spinal Tap was deemed “culturally, historically, or aesthetically significant” by the Library of Congress and was selected for preservation in the United States National Film Registry.

Critics praised the film not only for its satire of the rollercoaster lifestyles of rock stars but also for its take on the non-fiction film genre.  David Ansen from Newsweek called the film “a satire of the documentary form itself, complete with perfectly faded clips from old TV shows of the band in its mod and flower-child incarnations.”