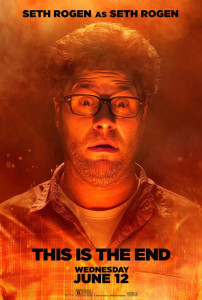 Sony Pictures, via Yahoo! Movies, has released a third red band trailer that includes new footage from their upcoming summer comedy This Is The End. The film is directed by Evan Goldberg and Seth Rogen. This Is The End stars the comedy talents of Rogen, James Franco, Jonah Hill, Jay Baruchel,Craig Robinson, and Danny McBride. The film is currently scheduled for release on June 14, 2013.

This Is The End tells a story of a group of celebrities who are attending a party at James Franco’s house, who are suddenly faced with the realities of the apocalypse. Most of the actors will be playing themselves in the film. This Is The End will also feature appearances by Michael Cera, Jason Segel, Emma Watson, Paul Rudd, Mindy Kaling, and Rihanna.