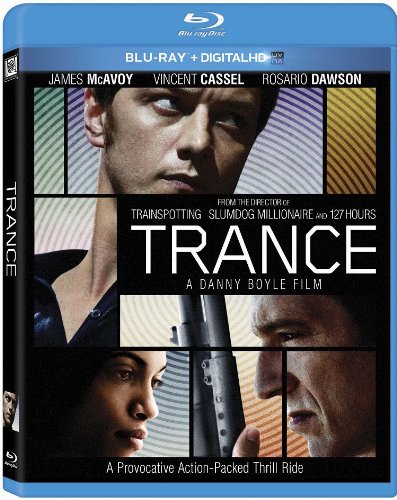 20th Century Fox Home Entertainment has officially announced that they are adding Trance to their upcoming slate of Blu-ray releases. The film is directed by Danny Boyle and is written by Joe Ahearne and John Hodge. The thriller stars James McAvoy, Vincent Cassel, Rosario Dawson, Danny Sapani, and Matt Cross. Trance will be available for purchase online and in stores beginning on July 23rd.

Boyle helms this psychological thriller about an auctioneer falling foul of a gang of ruthless art thieves. When upmarket art auctioneer Simon (McAvoy) double-crosses the gang responsible for the daring daylight robbery of a priceless painting by Goya, he incurs the wrath of the gang’s violent leader, Franck (Cassel). In the aftermath of a beating where he is knocked unconscious, Simon claims to be suffering from amnesia and is therefore unable to remember where the painting is, provoking Franck into hiring female hypnotist Elizabeth (Dawson) to find the answer. But as Elizabeth delves ever deeper into Simon’s subconscious, the lines between fantasy and reality converge, threatening to consume all as a series of shocking events spiral violently out of control.

Trance was released in April of 2013 and grossed over $17 million in worldwide box office.

Available on Amazon.com and iTunes.

20th Century Fox Home Entertainment has officially announced that they are adding Trance to their upcoming slate of Blu-ray releases.