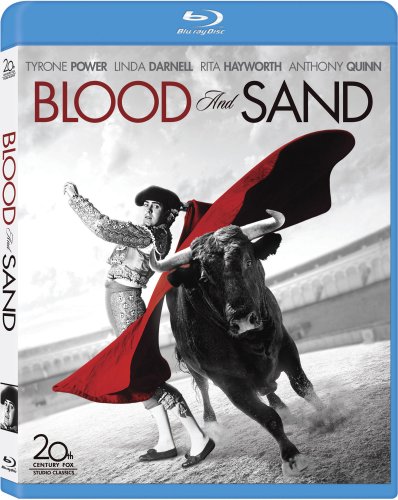 20th Century Fox Home Entertainment has officially announced that they are adding the classic film Blood and Sand (1941) to their upcoming slate of Blu-ray releases. The film was directed by Rouben Mamoulian and is based on the novel by Vicente Blasco Ibáñez. Blood and Sand stars Tyrone Power, Linda Darnell, Rita Hayworth, Anthony Quinn, and John Carradine. The film will be available for purchase online and in stores beginning on July 9th.

In the film, Juan Gallardo (Power) returns home to claim the hand of his childhood love and continue his rise toward becoming Spain’s greatest matador. But when he catches the eye of a beautiful seductress (Hayworth), Juan will learn that the battles that matter most are fought outside the ring. Winner of Oscar Award for Best Cinematography in 1942 (Ernest Palmer, Ray Rennahan).

The Blu-ray will includes several special features, including a commentary by Richard Crudo – the director of photography and 2003-2006 President of the American Society of Cinematographers.

Disclaimer: Affiliate links are contained in this post. This means when you click a link, and purchase an item, Movie House Memories will receive an affiliate commission. Advertisers and Affiliate Partnerships do not influence our content. See our Terms of Use about the inclusion of affiliate links on this site for more information.
May 30, 2013
1 minute read
Show More
Back to top button
Close
Close