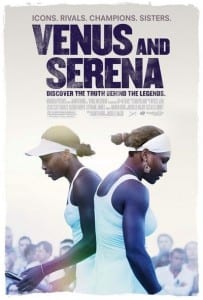 Magnolia Pictures has released a theatrical trailer for the documentary Venus and Serena. The film is directed by Maiken Baird and Michelle Major. Venus and Serena is scheduled for a limited release on May 10, 2013.

Ever since Venus and Serena Williams started playing in tennis tournaments, they’ve provoked strong reactions – from awe and admiration to suspicion and resentment. They’ve been winning championships for over a decade, pushing the limits of longevity in such a demanding sport. How long can they last? In Venus & Serena, we gain unprecedented access into their lives during the most intimidating year of their career. Over the course of 2011, Venus grappled with an energy-sapping autoimmune disease while Serena battled back from a life-threatening pulmonary embolism. Neither Venus nor Serena let their adversities hold them back. They drew their greatest strength from each other. The film features interviews with Venus Williams, Serena Williams, Richard Williams, Billie Jean King, and John McEnroe.

Divergent Behind The Scenes Featurette

The SpongeBob Movie: Sponge on the Run (2020) Official Trailer

Divergent Behind The Scenes Featurette

The SpongeBob Movie: Sponge on the Run (2020) Official Trailer