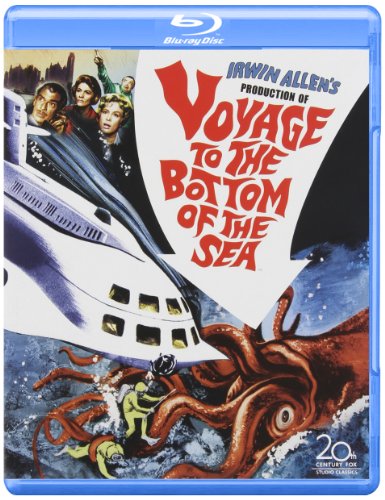 Voyage to the Bottom of the Sea Blu-ray

20th Century Fox Home Entertainment has officially announced the addition of the sci-fi adventure film Voyage to the Bottom of the Sea to their upcoming slate of Blu-ray releases. The film was directed by Irwin Allen, who wrote the screenplay along with Charles Bennett. The adventure classic starred Walter Pidgeon, Joan Fontaine, Barbara Eden, Peter Lorre, Robert Sterling, and Frankie Avalon. Voyage to the Bottom of the Sea is currently available for pre-order online and will be available in stores everywhere beginning on October 8th.

In the 1961 film, a routine scientific expedition to the North Pole turns into a race to save all mankind when a radiation belt in space causes a fiery inferno on Earth. Admiral Nelson (Pidgeon) and the crew of the atomic submarine Seaview battle saboteurs, giant sea-creatures and attacks by enemy submarines as they race to prevent global catastrophe. Renowned disaster film producer, Irwin Allen, produces and directs an all-star cast. The stunning visual effects and breathtaking underwater photography make this one of the most respected sci-fi adventure classics of all time.

The Voyage to the Bottom of the Sea Blu-ray will include several special features, including:

Disclaimer: Affiliate links are contained in this post. This means when you click a link, and purchase an item, Movie House Memories will receive an affiliate commission. Advertisers and Affiliate Partnerships do not influence our content. See our Terms of Use about the inclusion of affiliate links on this site for more information.
September 28, 2013
563 1 minute read
Show More
Subscribe
Login
0 Comments
Inline Feedbacks
View all comments
Most Recent Posts
Facebook Twitter LinkedIn Tumblr Pinterest Reddit
Back to top button
Close
wpDiscuz
0
0
Would love your thoughts, please comment.x
()
x
| Reply
Close