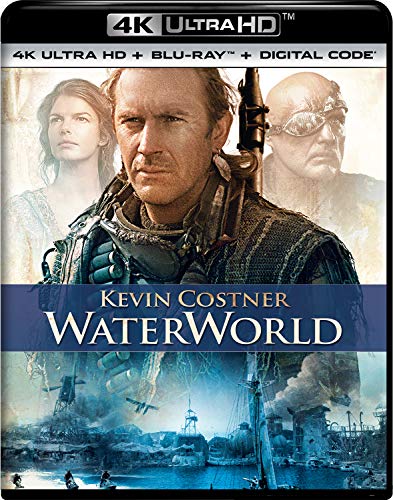 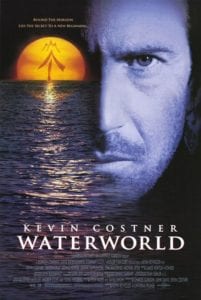 Waterworld takes place during a time when the polar ice caps have melted, covering (almost) all the Earth with water, there is a mutant who has adapted more than any other to survive. This merman produces, writes, stars in, and (sometimes) directs major motion pictures. You may know him best as, Oscar Award winner, Kevin Costner.

In today’s film, Mr. Costner channels his inner George Miller and gives us a reimaging of 1981’s The Road Warrior. Instead of a dry, sand covered Mad Max, we follow Costner’s wet, rust covered Mariner; the master of the waves with a customized sailboat. While docking at a floating, rust covered, trading post, “Mariner” encounters a young girl, portrayed by Napoleon Dynamite’s Tina Majorino. Majorino’s Enola has a misplaced tramp stamp, which some believe is a map a mysterious place call “Dry Land.”

A large group of bad guys, known as “Smokers,” led by Dennis Hopper’s “The Deacon,” uses their gas-powered jet skis, speed boats, and airplanes to capture the young waif for their own dry land gains. After a few high seas(?) adventures with Basic Instinct’s Jeanne Triplehorn, we finally get to see “Mariner” and “The Deacon” square off on the latter’s oil barge in a cliché battle for the young girl and her highly coveted back tattoo.