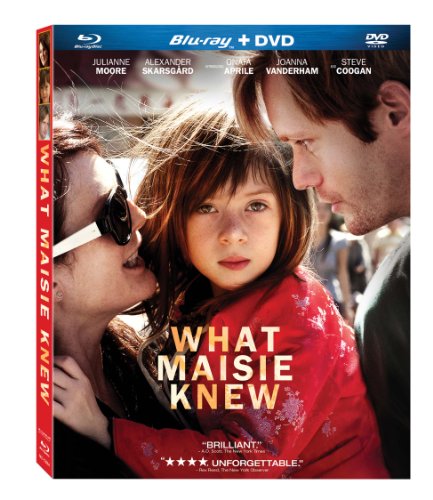 Millennium Entertainment has announced that they are bringing the family drama What Maisie Knew to their upcoming slate of Blu-ray releases. The film is directed by Scott McGehee and David Siegel and stars Julianne Moore, Steve Coogan, Alexander Skarsgård, Joanna Vanderham, and Onata Aprile. What Maisie Knew will be available for purchase online and in stores beginning on August 13th.

A contemporary reimagining of Henry James’ novel, What Maisie Knew tells the story of a captivating little girl’s struggle for grace in the midst of her parents’ bitter custody battle. Told through the eyes of the title’s heroine, Maisie navigates this ever-widening turmoil with a six-year-old’s innocence, charm and generosity of spirit.

An aging rock star (Moore) and a contemporary art dealer (Coogan)—Susanna and Beale are too self-involved even to notice their neglect and inadequacy as parents; their fight for Maisie is just another battle in an epic war of personalities. As they raise the stakes by taking on inappropriate new partners, the ex-nanny Margo and the much younger bartender Lincoln (Vanderham and Skarsgård), the shuffling of Maisie from household to household becomes more and more callous, the consequences more and more troubling. Always watchful, however, Maisie begins to understand that the path through this morass of adult childishness and selfish blindness will have to be of her own making.

Disclaimer: Affiliate links are contained in this post. This means when you click a link, and purchase an item, Movie House Memories will receive an affiliate commission. Advertisers and Affiliate Partnerships do not influence our content. See our Terms of Use about the inclusion of affiliate links on this site for more information.
June 23, 2013
1 minute read
Show More
Back to top button
Close
Close