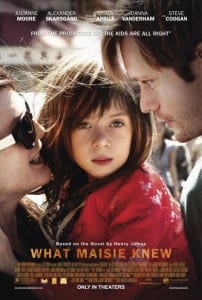 Millennium Entertainment has released a trailer for the upcoming family drama What Maisie Knew. The film is directed by Scott McGehee and David Siegel and stars Julianne Moore, Steve Coogan, Alexander Skarsgård, Joanna Vanderham, and Onata Aprile. What Maisie Knew will have a limited release into theaters beginning on May 3rd.

What Maisie Knew is a contemporary New York City revisioning of the Henry James novella by the same name. It revolves around unwitting 7-year-old Maisie, caught in the middle of a custody battle between her mother Susanna, an aging rock star, and her father, Beale, a major art dealer.

Theatrical trailer for What Maisie Knew, courtesy of Madman Films