Former Army buddies Bob Wallace and Phil Davis team up to become a top song-and-dance act following the end of World War II. After several years of success, Phil begins to become tired of the constant show biz grind and seeks to play matchmaker for Bob to get a break. They meet a pair of beautiful sisters named Betty and Judy who also have a song-and-dance act. When Betty and Judy travel to a Vermont lodge to perform a Christmas show, Wallace and Davis follow, only to find their former commander, General Waverly, as the lodge owner. A series of romantic mix-ups ensue as the performers try to help the General. 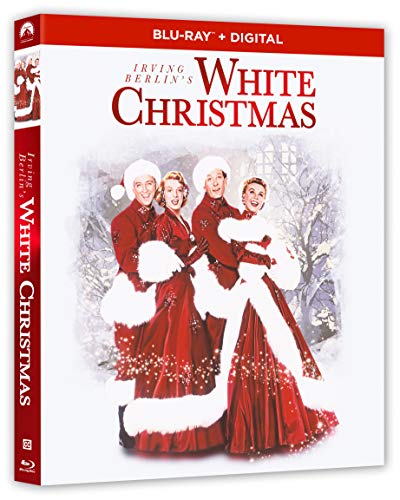 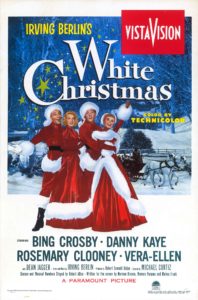 The film begins on Christmas Eve in 1944. In the middle of the war in Europe, Captain Bob Wallace (Bing Crosby) and Private First Class Phil Davis (Danny Kaye) put on a performance for the 151st Division to celebrate the reassignment of their beloved commanding officer, Major General Thomas F. Waverly (Dean Jagger). Bob is a well-known Broadway entertainer, while Phil is an aspiring entertainer. Waverly arrives with his replacement just as the show is ending and is grateful to his men for their good wishes. A few moments later, the entire unit is forced to take cover from an enemy aerial bombing run. A half demolished building begins to collapse, but Bob is too busy directing his men to notice. Phil jumps in and knocks Bob out of the way, saving the singer’s life. Phil’s arm is injured, but he survives. A few days later, Bob visits Phil in the field hospital to express his gratitude. Phil asks Bob to perform with him as a duet to perform a song that Phil wrote previously. Bob reluctantly agrees due to Phil saving his life.

A few years later, after the war, Wallace and Davis are hugely successful entertainers on Broadway whose theater act supports an army of staff. The two men have worked non-stop for years and are beginning to run down from the constant shows. However, Bob keeps the act moving forward even though Phil would like a little down time. Their attention is constantly being pulled in multiple different directions. The pair receive a letter from one of their former war buddies, who asks them to look at his sisters’ act to see if they can give some input. They go to a local club where they see Betty and Judy Haynes (Rosemary Clooney and Vera-Ellen) perform their singing act. Phil notices that Bob is smitten with Betty, while Phil shows some interest in Judy. After their performance, the Haynes sisters join Bob and Phil at their table. Phil and Judy get along great, but Bob and Betty do not, getting into an argument after Bob makes a statement that everyone has an angle in show business.

Judy and Betty are planning on heading to Vermont to perform at an inn over the holidays, but a disagreement with their landlord has a sheriff looking for the girls. Phil gives the girls the boys’ train tickets while Bob and Phil do a parody of their act to distract the sheriff. Bob and Phil catch up to the girls on the train, and Bob reluctantly agrees to go to Vermont with Betty and Judy to see the snow in Pine Tree, Vermont.

Once in Pine Tree, the group finds that there is no snow, and more importantly, there are no guests at the Inn. However, Bob and Phil are surprised to learn that General Waverly is the owner of the Inn. Waverly insists that the Haynes Sisters will be paid and expects them to perform, even if it just for him, his granddaughter Susan (Anne Whitfield) and his house keeper Emma Allen (Mary Wickes). Emma explains to Bob and Phil that the General cannot afford to pay the Haynes Sisters and keep the Inn open. Bob comes up with a plan to put on a full Wallace and Davis show at the Inn, which will use the Haynes Sisters in the act. Bob believes a Wallace and Davis show would bring an audience that will help the General’s financial situation.

Shortly thereafter, Bob and Phil bring their entire troupe up to Pine Tree. They begin rehearsals for the show, while Bob continues to show interest in Betty and vice versa. Meanwhile, Bob discovers that the General has requested to reenter the military, but his request has been politely refused by the Army. Bob sees that the General is struggling to find a new place in the world outside of the military. Bob comes up with the idea to recruit members of the military unit to come and show their appreciation for the General by attending the show, which will help the General’s financial situation and show their appreciation to the “Old Man”.

Bob calls his friend and variety show host Ed Harrison (Johnny Grant) to arrange a televised invitation to all the men formerly under the command of General Waverly to come to the Inn on Christmas Eve as a surprise. Harrison suggests putting the entire show on the television to give a lot of free publicity to the Wallace and Davis act, which Emma overhears. However, Emma fails to overhear Bob’s rejection of the Harrison’s offer, where Bob states that he wanted to keep the show separate from any business deal. Emma tells Betty about the phone call, and Betty begins to look down on Bob for what she believes is a person working an angle.

Betty’s sudden coldness to Bob causes Phil and Judy to take desperate measures to try to get the couple together. Phil and Judy put on ruse that they are engaged, hoping that Bob will follow suit and ask Betty to marry him. Bob tries to communicate with Betty, but she remains distant. Phil and Judy’s plan backfires, and Betty leaves, believing the impending marriage between Phil and Judy would signify the end of the Haynes Sisters’ act. Phil and Judy explain their plan to Bob, who promises to tell Betty what they did when he heads to New York to appear on the Ed Harrison show.

Bob explains the marriage ruse to Betty, but still doesn’t understand the reasons for Betty’s initial coldness. Betty begins to thaw a little, but suddenly chills again when Bob is suddenly called away to the Ed Harrison show. On the broadcast, Bob invites the veterans of the 151st Division to come to the General’s Inn in Vermont on Christmas Eve. Betty sees the broadcast and realizes that she was mistaken about Bob. She gets on the next train to Pine Tree and arrives just in time for the show. The whole division comes into Pine Tree secretly and manages to surprise the General. Waverly is overcome with gratitude at the sight of his former unit.

Bob, Betty, Phil, and Judy put on their show. During the show, it finally begins to snow, and the troupe opens the back doors to the theater to use the falling snow as a backdrop for the final number White Christmas. Bob and Betty declare their love for each other after overcoming their misunderstandings. Phil and Judy also fall in love, while everyone in the Inn’s theater raise their glasses and toast the holidays.