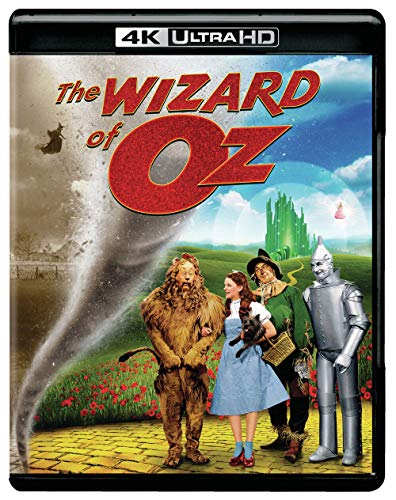 Warner Bros. Home Entertainment released The Wizard of Oz to 4K Blu-Ray on October 29, 2019. The film was directed by Victor Fleming and was based on the novel by L. Frank Baum. The classic film famously starred Judy Garland, Frank Morgan, Ray Bolger, Bert Lahr, Jack Haley, and Margaret Hamilton.

‘The Wizard of Oz’ Film Summary

In this charming film based on the popular L. Frank Baum stories, Dorothy (Garland) and her dog Toto are caught in a tornado’s path and somehow end up in the land of Oz. Here she meets some memorable friends and foes in her journey to meet the Wizard of Oz (Morgan) who everyone says can help her return home and possibly grant her new friends their goals of a brain, heart and courage.

The Wizard of Oz received five Academy Award nominations, including Best Picture (Outstanding Production), and captured two Oscars — Best Song (“Over the Rainbow”) and Best Original Score — plus a special award for Outstanding Juvenile Performance by Judy Garland. The film was an overwhelmingly popular and critical success upon its initial release, and repeated its ability to captivate audiences when MGM reissued the film in 1949 and 1955. The film made a new kind of history with its network television premiere in 1956 on CBS. Nearly 45 million people tuned in for this initial telecast, marking the beginning of an annual tradition. Ever since, The Wizard of Oz has been shown virtually annually on network (and then cable) television; its magical story and heartfelt performances have enabled it to grow from a perennial classic to its current status as a treasured icon of popular culture.