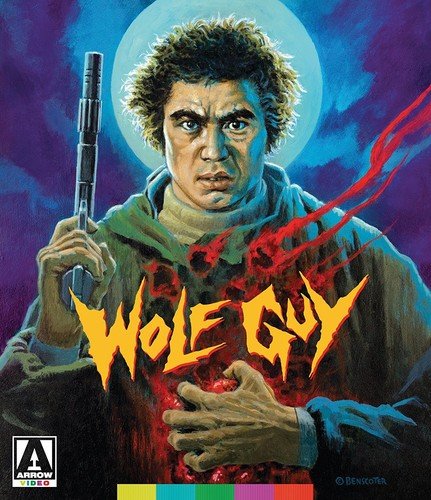 Arrow Video has announced that they will release Wolf Guy onto Blu-ray this April. The film is directed by Kazuhiko Yamaguchi and stars Kyôsuke Machida, Shin’ichi Chiba, and Saburô Date. Arrow Video will bring Wolf Guy to Blu-ray on April 25, 2017.

Wolf Guy was released in Japan of April 5, 1975 and grossed over BOX OFFICE GROSS at the box office.

Shinichi “Sonny” Chiba is a martial arts “manimal” in the ultra-70’s, 100% bizarre mixture of horror, action and sci-fi that is Wolf Guy, one of the rarest and most sought-after cult films produced by Japan’s Toei Studio. Based on a manga by Kazumasa Hirai (creator of 8 Man), and never before released outside of Japan, it’s a genre film classic waiting to be discovered and a completely unclassifiable trip into phantasmagoric funk.

Chiba stars as Akira Inugami, the only survivor of a clan of ancient werewolves who relies on his supernatural powers to solve mysterious crimes. After a series of bloody killings perpetrated by an unseen force, Inugami uncovers a conspiracy involving a murdered cabaret singer, corrupt politicians, and a plot by the J-CIA to harvest his blood in order to steal his lycanthropic powers! At the same time, Inugami also discovers the truth behind his family heritage, and that he may not be the last of his kind.

Affiliate links contained in this post will take you to Amazon.com. This means when you click a link, and purchase an item, the MHM Podcast Network will receive an affiliate commission. When you use these links MHM gets credit regardless of what you purchase, or from what country you order. Best of all, it doesn’t cost you a penny more! Advertisers and Affiliate Partnerships do not influence our content. See our Terms of Use about the inclusion of affiliate links on this site for more information.
February 21, 2017
2 minutes read
Show More
Back to top button
Close
Close