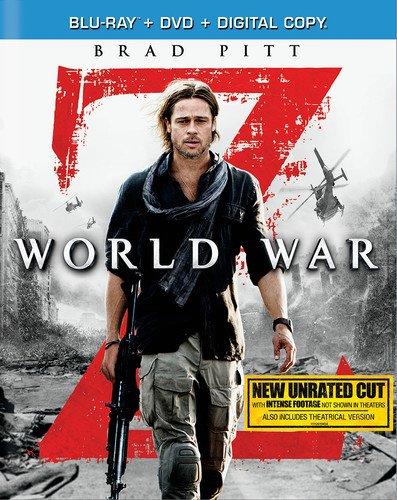 Based on Max Brooks’ best-selling novel “World War Z: An Oral History of the Zombie War,” the story revolves around United Nations employee Gerry Lane (Pitt), who traverses the world in a race against time to stop the Zombie pandemic that is toppling armies and governments and threatening to decimate humanity itself. The book “World War Z” was inspired by “The Good War”, an oral history of World War II by Studs Terkel; and by the zombie films of director George A. Romero. Brooks used “World War Z” to comment on social issues like government ineptitude and American isolationism, while also examining themes of survivalism and uncertainty.

Both Blu-ray editions of World War Z feature the Unrated Cut in 2D, 1080p video, DTS-HD Master Audio 7.1 surround, and DVD and UltraViolet copies of the film. Only the 3D combo pack includes both the Unrated and theatrical cuts (each in 1080p with DTS-HD MA 7.1 surround); the unrated cut is presented in 2D, while the theatrical cut presented on a separate MVC-encoded disc in 3D. Extras for both releases include:

Disclaimer: Affiliate links are contained in this post. This means when you click a link, and purchase an item, Movie House Memories will receive an affiliate commission. Advertisers and Affiliate Partnerships do not influence our content. See our Terms of Use about the inclusion of affiliate links on this site for more information.
August 7, 2013
2 minutes read
Show More
Back to top button
Close
Close