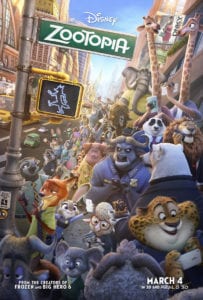 Zootopia is a modern tale of anthropomorphic mammals that face prejudice and xenophobia that parallel our own challenges in society. New graduate, Judy Hopps, starts her first day on the police force with dreams of changing the world. She is the first rabbit police officer in Zootopia, and oozes with excitement. Unfortunately, Police Chief Bogo assigns her to parking duty instead of fighting crime. To him, Judy doesn’t belong in a job where big beasts keep the peace. She even fails to measure up in Little Rodentia, where she is a giant compared to the rodents living there.

Intent on proving herself, Hopps accepts Chief Bogo’s challenge to find the missing Emmitt Otterton in 48 hours or resign. Hopps quickly pairs herself up with a con fox named Nick Wilde, and of course he’s completely against it working with her. Although the fox is the rabbit’s natural enemy, Nick is the only animal in Zootopia that can help her crack the case.

Eventually, the two uncover a scheme at the highest levels that pits prey vs predator. In doing so, fear spreads throughout the majority of the population, and the minority pay for it.

Disney weaves so much humor and intelligence into the plot that the story’s allegory doesn’t become preachy or heavy handed. The detail of the environments adds to the exquisite ambiance, and the quality of animation is quintessential Disney. Ginnifer Goodwin and Jason Bateman share a great rapport that comes across on screen. The voice work from the rest of the cast is stellar, and Alan Tudyk is back again. This is his fourth consecutive Disney animated film; the others being 2012’s Wreck-It Ralph, 2013’s Frozen, and 2014’s Big Hero 6.

As for music, Shakira leads a fun-filled soundtrack, and you know, kids love a Disney song to sing all day. I give Zootopia 4 1/2 stars out of 5.