12 Angry Men is a behind-closed-doors look at the American legal system that is as riveting as it is spare. One member on a jury of white men dissents as they get ready to pass judgment on a Puerto Rican teenager charged with murdering his father. The result is a saga of epic proportions that plays out over a tense afternoon in one sweltering room as that juror tries to convince the others of the young man’s innocence. 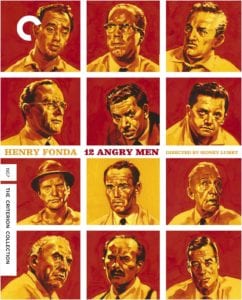 Meet the jury of 14 white males

The film begins within a New York City courtroom where 14 men, and yes, only men, are charged by a judge to deliberate the fate of a man who stands accused of killing his father with a knife. The judge informs them that if the man is found guilty, he will be sentenced to the death penalty. The judge dismisses the two alternate jurors and sends the remaining twelve men back to the jury room to deliberate.

The cabal initially seems jovial and friendly, exchanging pleasantries and small talk. It seems a unanimous verdict is likely. However, after their first vote, they discover there is a fly in the ointment. Juror #8, played by Henry Fonda, states that he is voting not guilty because he simply is not convinced beyond a reasonable doubt that the young man is guilty.

He explains that there is too much at stake for him to simply go along with the remaining jurors’ verdict without at least talking about it first. His vote annoys the other jurors, who simply want to move on and not discuss what they believe is an open and shut case.

Trying to reach a unanimous verdict

The rest of the film’s focus is on the jury’s difficulty in reaching a unanimous verdict. The plot reveals that some of the jurors harbor personal prejudices that are swaying their vote. Despite this, Juror #8 maintains that the evidence presented in the case is circumstantial, and that the boy deserves a fair deliberation. He calls into question the accuracy and reliability of the only two witnesses to the murder, the rarity of the murder weapon, and the overall questionable circumstances. He further argues that he cannot in good conscience vote guilty when he feels there is reasonable doubt of the boy’s guilt.

Over the course of the rest of the film, the jurors slowly but surely come around to Juror #8’s point of view; until ultimately, the lone holdout for the Defendant’s guilt is Juror #3. Juror #3, who has been fighting with Juror #8 throughout the entire film, gives a long and increasingly tortured string of arguments, ending with his unspoken epiphany that he was voting guilty based on his own tortured relationship with his own son. Juror #3 tears up a photo of him and his son, and breaks down crying before changing his vote to not guilty. The verdict is unanimous. The men leave the jury room to announce their verdict.

The film never reveals whether the men’s verdict is the correct one, for that is not the purpose of the film. The film simply shows the strength of the American criminal justice system. Everyone is entitled to a fair trial and for a jury of their peers, who will give due consideration of the evidence, to judge them. And if the jury cannot be certain that a defendant is guilty, if there is any reasonable doubt, they must acquit him.