In Iron Man, Tony Stark is a rich billionaire who also happens to be a genius, playboy, and philanthropist. After a weapons presentation in Iraq, terrorists manage to capture him which results in an injury that fills his chest with with shrapnel. In order to escape, he creates a suit of armor we call Iron Man.

Once he safely returns home, Stark perfects his design to use for protecting humanity from evil. This catches the eye of a mysterious organization called S.H.I.E.L.D. Meanwhile, the chairman of Stark Industries discovers this suit, and has nefarious plans of his own for Tony’s work. 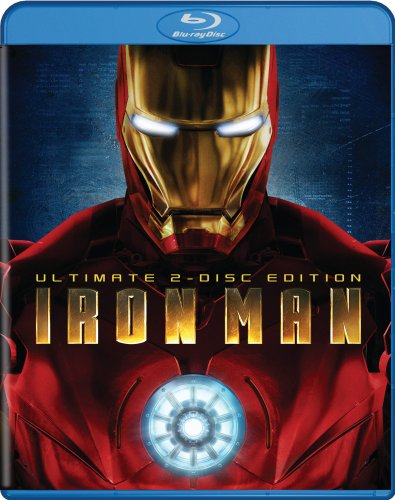 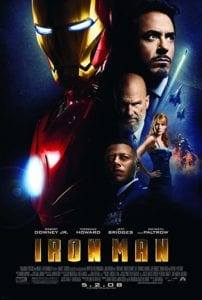 Iron Man begins with Tony Stark (Robert Downey Jr.). The billionaire playboy with a big ego (and his own personal demon in a bottle) is the son of defense contractor Howard Stark. Tony has inherited Stark Industries from him, and the job takes him to war-torn Afghanistan. There, with his friend, Lieutenant Colonel James Rhodes (Terrence Howard), they demonstrate the new “Jericho” missile. After this little presentation ends, Stark and Rhodes’ convoy comes under attack.

The terrorist group, the Ten Rings, attacks them, and one of their missiles badly injures Stark. They capture him, and take him to their cave where fellow captive, Professor Ho Yinsen (Shaun Toub) implants an electromagnet into Stark’s chest. It serves to keep the shrapnel in his chest from reaching his heart and killing him.

Stark and Yinsen secretly build an arc reactor which powers Stark’s electromagnet and an armored prototype suit to boot. They do a pretty good job keeping their little project hidden from the terrorists, but as they near completion on it, the Ten Rings find out, and then attack the workshop. Yinsen sacrifices himself which allows Stark to escape with the suit.

Tony makes them pay for killing Yinsen. He angrily burns the Ten Rings’ weapons before flying off, and crashing in the desert. His suit is destroyed from the encounter.

Now free, Stark builds a slimmer and more powerful version of the armor plus he boosts his arc reactor’s power for his chest. Once he’s perfected the Iron Man suit, he announces his company will no longer manufacture weapons. This displeases his father’s old partner and the company’s current manager, Obadiah Stane (Jeff Bridges).

When Stark Industries holds a charity event, reporter Christine Everhart (Leslie Bibb) tells Stark that his company’s weapons were recently delivered to the Ten Rings, and they are using them to attack Yinsen’s home village of Gulmira.

Annoyed, Stark whips out his Iron Man suit, and flies to Afghanistan to save the villagers. As he returns home, two fighter jets attack him. This forces Stark to reveal his new secret identity to Rhodes in order to end the attack.

By now, the Ten Rings have pieces of Stark’s prototype suit, and they meet with Stane, who has been trafficking arms to criminals worldwide. He wants to replace Stark as Stark Industries’ CEO, so he reverse engineers the wreckage of the prototype suit the Ten Rings gives him.

Stark has Pepper Potts (Gwyneth Paltrow) hack into his company’s database to track any illegal shipments his company made. She discovers that Stane hired the Ten Rings to kill Stark, but then they changed their mind. Potts then informs S.H.I.E.L.D. Agent Phil Coulson (Clark Gregg) of Stane’s misdeeds.

Stane can’t duplicate Stark’s arc reactor, so he gets bold and tries to steal the one off his chest. After Potts and some S.H.I.E.L.D. try to arrest Stane, he throws on his Iron Monger suit, and attacks them. Stark fights Stane, but find himself underpowered without his new reactor running at full steam. Eventually, Stark gets Potts to overload the large arc reactor that powers his building. That sets off an extraordinary power surge that overwhelms Stane and his suit, and he falls into the exploding reactor which instantly kills him.

With Stane gone, Stark publicly admits to being Iron Man the next day at a press conference.

Check out our The Infinity Saga Quickie Recap, and add the film to your collection today!