13 Hours: The Secret Soldiers of Benghazi is the gripping true story of six elite ex-military operators assigned to protect the CIA who fought back against overwhelming odds when terrorists attacked a U.S. diplomatic compound on September 11, 2012. When everything went wrong, six men had the courage to do what was right. 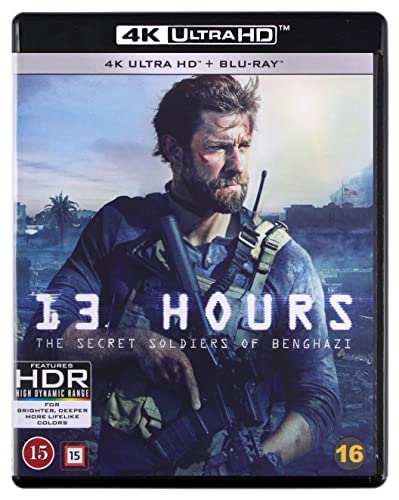 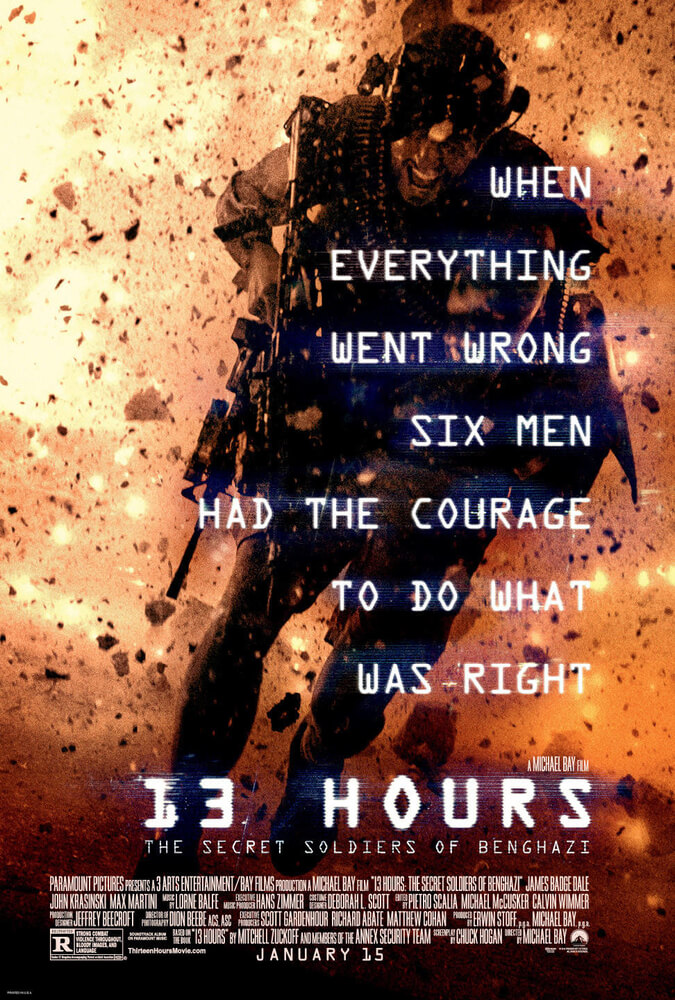 13 Hours takes place in 2012; Libya is in a state of chaos after the assassination of Colonel Muammar Gaddafi, the country’s former leader. Despite the chaos, the United States maintains a diplomatic compound in the city of Benghazi with the hopes of eventually making it into an official consulate. Additionally, the CIA maintains a secret outpost called the Annex less than a mile away from the compound. The Annex is protected by a team of private military contractors from Global Response Staff (GRS). GRS is compromised of former military special operations officers who sign lucrative contracts to work overseas.

Jack Silva (John Krasinski) arrives in Benghazi after signing a contract for a deployment with GRS for a couple of months. Jack is picked up at the airport by his good friend Tyrone “Rone” Woods (James Badge Dale), the commander of the GRS team at the Annex. At the Annex, Jack is introduced to rest of the GRS team, Mark “Oz” Geist (Max Martini), John “Tig” Tiegen (Dominic Fumusa), Kris “Tonto” Paronto (Pablo Schreiber), and Dave “Boon” Benton (David Denman). Jack is also introduced to the CIA Chief of Station (David Costabile) at the Annex, who does not seem to respect or like the GRS personnel.

The Annex is informed that the United States Ambassador to Libya, Chris Stevens (Matt Letscher), plans to stay at the diplomatic compound despite the instability in the country and the compound’s lack of security. The GRS team evaluates the compound and warns the Ambassador’s security personnel of the property’s security short comings. Despite the warning, Ambassador Stevens arrives in Benghazi to establish diplomatic relations with the country’s fledgling government. The Ambassador has only five Diplomatic Security (DS) agents with him, led by Scott Wickland (David Giuntoli) and Dave Ubben (Demetrius Grosse). The compound’s security is supplemented with guards from the local February 17th Martyrs Brigade militia, nicknamed 17-Feb.

On the eleventh anniversary of the September 11th attacks, both the compound and the Annex are on lock down due to potential terrorist attacks. The Ambassador notices Libyan citizens taking pictures of the compound and notifies his security staff. At the Annex, Jack learns that his wife Becky (Wrenn Schmidt) is pregnant with the couple’s third child. Jack is scheduled to return home in two weeks. That night, a group of militants from Ansar al-Sharia assault the diplomatic compound. The 17-Feb guards abandon their posts and flee, leaving only the five DS agents to protect the Ambassador. The attackers access the compound with ease and begin setting the buildings on fire. Wickland is able to get the Ambassador and an IT specialist, Sean Smith (Christopher Dingli), into the compound’s safe room. However, the smoke from the fire begins to overwhelm the men inside.

At the Annex, Rone has his men ready to deploy and assist the compound, but the Chief refuses to authorize their deployment, fearing that it will reveal the location of the “secret” CIA headquarters. The GRS soldiers wait for over thirty minutes as the situation continues to deteriorate at the compound. Rone eventually orders him and his men to the compound without the Chief’s permission after hearing that Wickland and the Ambassador would be forced to leave the safe room due to the fire.

The GRS personnel arrive at the compound and find men with weapons all over the compound. However, the team has no idea who are the insurgents and who are 17-Feb. Initially, no one is firing on them. They join forces with the other DS agents. Wickland escapes from the fire, but he has lost both the Ambassador and Smith. Rone and Jack go into the burning building to find the missing men, but they are only able to find the body of Smith, who has died. Rone decides that no one could have survived the fire and ends the search for the Ambassador’s body.

The GRS teams prepares to evacuate the compound in the armored vehicles that they have brought. The insurgents return and begin firing on the Americans. The DS team retreats in one car, but Wickland goes the wrong direction in the confusion and turns right into the militant forces. Their vehicle is shot at and firebombed all the way back to the Annex. The GRS returns to the Annex relatively unharmed.

Rone has his men prepare to defend the Annex knowing that an attack by the militants is imminent. The Chief has his staff call for assistance. The local police and 17-Feb guards refuse to respond in fear of the militants. The GRS officer in Tripoli, Glen “Bub” Doherty (Toby Stephens), radios that he is organizing a response team, but he is still several hours away. The Annex is informed that they are too far away from any American base to receive military helicopter support for defense or evacuation. The Annex defends itself against two attacks by the militants, but the GRS team knows that with each attack that the militants are learning how to overwhelm the Annex.

In Tripoli, Bub is able to get two additional Delta operators to volunteer to accompany him on the rescue mission. A sheik loans the United States his private jet to fly Bub to Benghazi and to evacuate the Annex personnel. Once they arrive in Benghazi, they are delayed getting to the Annex as the Libyan military refuses to transport the Americans to the secret base. Eventually, they are able to convince the Libyan soldiers to get on the road. Bub arrives at the Annex with the Delta operators and prepares to evacuate back to the airport. However, the Libyans military suddenly depart just prior to a militant attack.

The militants launch a mortar attack in which Ubben and Oz are wounded. Oz’s left arm is partially severed. Rone runs to help Oz and is killed by another mortar round. Bub is killed when a mortar detonates directly in front of him. Nevertheless, the GRS and DS forces are able to fight off the militant attack. Shortly thereafter, a huge convoy of armored vehicles begins to approach the Annex, and the GRS team believes that the battle is lost and prepare for a last stand. However, the convoy is from the Libya Shield Force militia with orders to escort the Annex personnel to the airport. The Annex is evacuated. They learn that the Ambassador was brought into a Libyan hospital and pronounced dead from smoke inhalation.

At the airport, the CIA staff and the wounded Oz board the private jet to Tripoli while the GRS team is told that they need to wait for another plane due to capacity issues. The GRS team waits at the airport with the bodies of their comrades and the Ambassador. Jack calls his wife and tells her that there was an incident, that Rone is dead, and that he is coming home as he breaks down crying. The closing titles of the film reveal that all of the surviving members of the Annex security team received contractor medals in a private ceremony and have since retired, and that Oz was able to save his arm after several surgeries.