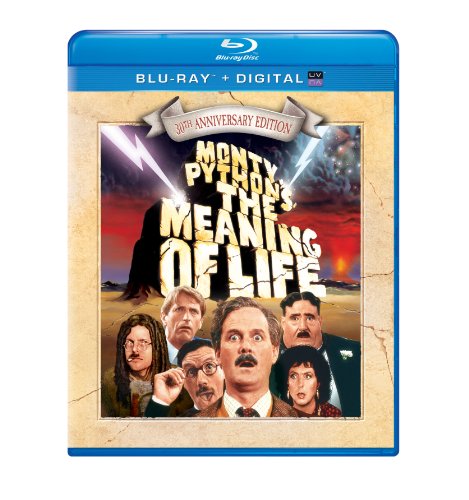 Universal Studios Home Entertainment has announced the addition of the comedy Monty Python’s The Meaning of Life to their upcoming slate of Blu-ray releases in honor of the film’s 30th Anniversary. The film was directed by Python members Terry Jones and Terry Gilliam and stars the other members of Monty Python John Cleese, Eric Idle, Graham Chapman, and Michael Palin. The Blu-ray edition includes a new, exclusive cast reunion and a variety of additional bonus features. Monty Python’s The Meaning of Life is currently available for pre-order online and will be available in stores everywhere beginning on October 8th.

In the early 1980’s, The Meaning of Life brought all the loyal Pythons back together, sharing writing responsibilities as they returned to their much loved sketch show format, with Terry Jones directing and John Goldstone producing. With roles ranging from The Grim Reaper to the legendary Mr. Creosote, the Python troupe first left audiences in stitches in 1983 with iconic scenes such as “The Miracle of Birth,” “Live Organ Transplants” and the outrageous “The Autumn Years.”

Monty Python’s The Meaning of Life was released in April of 1983 and grossed over $14 million at the box office.

The Blu-ray release of The Meaning of Life features a 1080p video presentation, a DTS-HD Master Audio 5.1 surround track, and the following extras: